Talk about strange developments--saw a broadcast of Tim Burton's Charlie and the Chocolate Factory (2005) recently and two things struck me stronger than ever before: that the dramatic center of the film belonged to Charlie (Freddie Highmore), from whom this version of Roald Dahl's book rightly takes its name, and that Johnny Depp is basically channeling Michael Jackson: 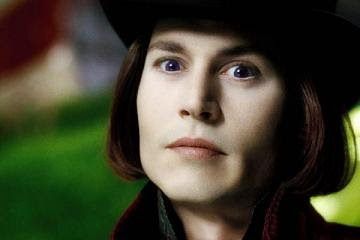 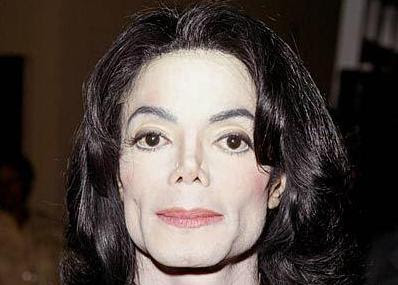 I know I'm hardly the first one to notice the similarities, but in my own blinkered way I've started to realize just how deliberate and, well, inspired the choice may be. Burton and Depp tap into Jackson's lurid reputation to give their protagonist the kind of subtext Gene Wilder's Wonka was never able to exploit. Of course the earlier version had Wilder, no mean asset, who could play an infinite variety of lunatics to perfection better than Depp ever can--but beyond the actor's considerable abilities no, no tabloid unwholesomeness in that earlier effort.

This film's funnier this way, considering recent events; one thinks more and more about parallels to events in Jackson's life, and how they add resonance to Wonka's own story--Wonka's factory standing in for Jackson's Neverland; Wonka and Jackson's desire for secrecy competing against a pathological need for attention; the five Golden Ticket winners enjoying their tour, at any moment in danger of being invited to a sleepover at Wonka's private quarters...

And, finally, a comic justification for Burton's addition of Wonka's father, always to my mind the film's weakest element. Of course a man will suffer severe trauma, will develop into an eccentric (to put it kindly) introvert when the biggest single adult influence in his childhood is Dracula, or Joe Jackson; I for one am not surprised.

And it's not as if Burton's caricature were totally unkind. He grants Jack--sorry, Wonka--a certain amount of closure, plus the possibility of a surrogate family. It's the kind of benign ending one might have wished for Jackson, too.

Also saw again after many years (and much urging from fans whose opinions I respect) Steven Spielberg's A.I.: Artificial Intelligence (2001). I'd dismissed it as a Spielbergian botch of Kubrick's (Philip K. Dick's?) ideas. This time around the film seems much more poignant (if still far from perfect), easily Spielberg's most ambitious and troubling work.

The film's first third (funny how Kubrick's projects--2001, A Clockwork Orange, and Full Metal Jacket come most readily to mind--tend to break down into sections of threes) is the most emotionally wrenching: a dark, domestic comedy about the sibling rivalry between boy and robot for mom's affections (come to think of it, aside from Lolita and The Shining Kubrick has done precious little drama or comedy, domesticwise--it's almost always genre fare). Here Spielberg to my mind most closely hews to the look and tone of Kubrick's films, at least in coldly recording the various emotional dislocations being inflicted on the hapless Swintons. The abandonment in the forest that climaxes this first third makes one think of the tale of Hansel and Gretel--a parent's mixed feelings of love and repulsion resulting in a scene as traumatic as anything Spielberg (or Kubrick for that matter) has ever done.

The middle third is said to be Spielberg's take on A Clockwork Orange. I don't quite see the similarity--despite the striking production designs, Kubrick's vision of future England displayed a sterility and desolation the other can't quite match. Spielberg may be aiming for a dystopia, at least where robots are concerned, but what I see here is a vibrant, colorful tomorrow, filled with technological marvels. The man can't help being what he is, I suppose; even in Minority Report (2002), where he relies heavily on Janusz Kaminski's gray color palette to make the future look unappealing, there are 3-D ads that call you by name, a marvel of an electric car that assembles all around you, and (lovely touch) creepy carnivorous flowers that nip at your fingertips. Spielberg, unlike Kubrick, has a difficult time evoking despair; there's just too much restless energy flowing out of his filmmaking, where Kubrick can sap the juice out of one's optimism through the sheer architectonic power of his images.

I questioned the high level of intelligence of the existing mechas in my article on the film. Actually, I may have missed the more complex view Spielberg and Kubrick had in mind--these robots are smart, very smart, capable of a high level of logical reasoning; what the film's diminutive hero David (Haley Joel Osment) possibly represents is a robot able to jump tracks, use imagination, connect seemingly disparate elements to form a cohesive whole. The heart of this segment--of the film's debate on what constitutes genuine intelligence, I think--is the "Dr. Know" sequence where in the space of seven questions (three of which are wasted) David manages not just to track down his Blue Fairy, but also point up the qualitative difference between his mind and other robots'. David's companion Gigolo Joe (Jude Law) may provide crucial information (where Dr. Know can be found, how much each question costs), but it's clearly David who drives the interrogation--bringing up the subject of "fairy tales," suggesting it's possible that what they're looking for is both "fact" and "fairy tale," formulating the final, crucial question that gives them their first real clue.

Later Gigolo Joe brings up a disturbing possibility--what if what David's looking for isn't real? In the face of doubt, David professes faith ("My mommy doesn't hate me! Because I'm special! And unique! Because there's never been anyone like me before, ever!")--something robots are supposedly incapable of doing. Joe replies to David: "She loves what you do for her, as my customers love what it is I do for them." Sharp observation, but that's all it is: an observation, a distillation of what he's seen and known.

Joe does conclude with these words: "We are suffering for the mistakes they made because when the end comes, all that will be left is us. That's why they hate us, and that is why you must stay here, with me." Joe turns out to be prophetic, and seems to display some evidence of affection, or need for David's companionship (true Joe is programmed to show affection--he's a love 'bot, after all--but David is presumably not in the category of clients he's supposed to show affection to). Which brings us back to my original objection, or question, or whatever: just how special is David, and why does he represent an advance in artificial intelligence?

The middle third climaxes with the presentation of the story's ostensible final solution--a solution David ultimately rejects. The last third begins with yet another of Kubrick's 'magical journeys' (think 2001), here through time, not space. On my first viewing I was unhappy with the possibility that David will hibernate through his tedious trip on low batteries; this time I managed to ascertain that David is conscious, and will be for for a possibly very long time before he runs out of batteries (But what happened to his DAS, or Damage Avoidance System, and his ability to find creative solutions? Do they just run out, like the batteries?).

As for the ending (please skip this paragraph if you haven't seen the film)--yes it's sad, tragic even, but I'd love to have seen Kubrick's take. According to Spielberg, Kubrick wanted to produce the film with him to direct, and I'd love to have seen more of Kubrick's influence (of this scene, at least). I know Kubrick intended for Strauss to play in the background (did he intend the ending to mimic so closely the final scene of 2001?), but knowing Kubrick and his handling of drama and accompanying music (see, oh, the finale of Paths of Glory, the farewell scene between Humbert and his beloved in Lolita, the climactic duel in Barry Lyndon) he would most likely have handled it in a different manner--the emotions of the scene as merely an element (a disciplined element) of a precisely composed whole, and not threatening to overwhelm everything as it does here. As mentioned before, I suspect Spielberg despairs of ever doing despair properly.

Depp tried to shake off the rumors about basing his Wonka performance on MJ, as he'd admittedly based his Jack Sparrow on Keith Richards. But I think there was something disingenuous about his denials. The idea of a Wonka/Jackson who hates kids is pretty funny.

Did Jackson really like kids? What about those gloves he wore? I think Depp saw something there that was uncomfortable with human contact of any kind, and took off from that.

garbage...
Michael Jackson LOVED kids;
Wilbur Wonka didn't care for them AT ALL, he even recoiled when they came close to him...
THAT'S A HUGE DIFFERENCE!
i think people are just trying to make connections that aren't there.

Heh, sure Jackson loved kids. The way he loved kids is every bit as creepy if not more so than how Wonka (the Burton version anyway) hated them. And that's the connection Burton's trying to make.