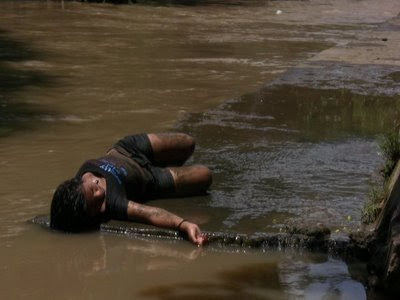 Sherad Anthony Sanchez's Imburnal (2009) which screened in the just concluded Jeonju International Film Festival has won both the Woosuk and NETPAC award.
The film is an over four hour long nonlinear digital film about two boys who spend (or misspend) their childhood hanging out in a sewage ditch in Barangay Matina Aplaya, Punta Dumalog, in Davao. They curse, talk about sex, collect cockroaches in jars, and (arguably the most disturbing image of all) bathe in the ditch's filthy waters.
The film has had its share of controversy. It was rejected three times by the Movies and Television Ratings Board (MTRCB) for its "objectionable presentation" of poverty (Which makes one wonder what the board would have thought of the films of Lino Brocka--most of which portray poverty, and which former First Lady Imelda Marcos objected to because they portrayed the Philippines in an unfavorable light (the board also seems to have inspired other government agencies on their policies regarding the encouragement of intellectual and cultural freedom).

The NETPAC and Woosuk Award jurors must have seen more than mere shock value in the film, however. The film was chosen "because it fulfills the progressive spirit of the JIFF: it is an innovative, experimental, even miraculous work, a unique blend of documentary and fiction, which returns us to the fundamental question of the past and the future: what is cinema?"
The Woosuk Award comes with a $10,000.00 prize. The film also won the Best Picture at the 4th Cinema One Originals Digital Film Festival, and the Lino Brocka Grand Prize at the 10th Cinemanila International Film Festival.
at 5:11 AM

I saw one half of Imburnal (up until the now infamous music over blackness sequence) at the HKIFF, leaving halfway through because I hadn't realised its running time until it was too late and decided not to miss the next show.

Now... had Imburnal in any considerable way captured my attention with its artistry, ideas or presentation, I might have stayed. It didn't, at least not enough to justify another helping of what I'd just sat through. The occasional image lingers in my mind and the tiptoeing into the surreal towards the middle began to give meaning to the barren first half, but it was not enough.
By contract, I sat through Satantango, a much longer movie where possibly less occurs than in Imburnal, utterly enthralled. Bela Tarr turned his inert, hollow landscapes into an abyss that swallowed its characters and me with it. The slow passage of time was part of these characters' lives, imprisoned in a slow cycle of birth, drinking, fucking and dying.
Imburnal seems to attempt the same atmosphere of aimless stagnation amongst its sewer rat children, but I felt it overreached by half and ended up diluted its most interesting aspects while coming out looking like the kid who thinks he's worth listening to.

There were moments that the film's pacing see sawed me into a half-dream state wherein I welcomed the increasingly hallucinatory images, but too many were the extended sequences of visual diarrhea by an editor in need of an editor.