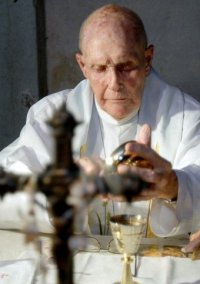 I first met Father during a production of The Bridge (a play Father had written and directed, about Matteo Ricci), and through rehearsals and tours of the Philippine countryside performing the play for various schools and colleges, learned the virtues of teamwork, friendship, loyalty, discipline, patience, hard work--everything I should have learned from the classroom or from my family but for one reason or another did not (either no one bothered to teach them--my school's main emphasis was math and science--or I just didn't listen).

Father helped me listen, think, grow. I joined his other productions: The Lady (about Our Lady of Fatima); historical pageants of one kind or another; a radio play; a short-lived TV series; a modern-day drama exposing the abuses of child prostitution. It was a priceless if unconventional education that I'd never trade for anything in the world, and if there's anything of value in me as a person and Filipino, I trace it the years spent earning that education--my years spent under Father's supervision.

Oh, and humor--humor was important. We'd pray before the start of every performance, and Father would rattle off the different saints, and end with St. Jude, who was special: we'd all go "Saint Juuuude!" probably not for any particular reason, but because it sounded so funny. Father always smiled; sometimes he'd stretch that last syllable with us.

He'd call us his "ducks." I never thought to ask why, it was probably a term of endearment, but for some reason when he said "Noel my duck!" it pleased me to no end; it lit a warm glow inside. I'm pretty sure I wasn't the only one who felt that way, either.