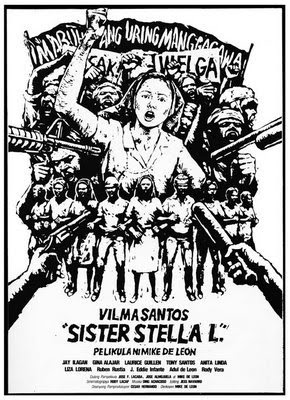 In celebration of Sister Stella L.’s 25th anniversary, the UP Film Institute is holding a special screening of the film on March 20, 5 p.m., at the Cine Adarna, UP Diliman.


My article for the occasion:

It was 1984, and the mood was angry. Difficult to describe just how angry, but the film was released less than a year after the assassination of Benigno 'Ninoy' Aquino, Jr., after the massive parade bearing his body from Santo Domingo Church down Quezon Avenue. The milling crowds watching Aquino's coffin pass were in a peculiar mood, a mood perhaps not unlike what the Roman centurions might have sensed from the surrounding crowd two millennia ago, while escorting their condemned Jew--veteran soldiers troubled, trembling, knowing how dangerous the moment was. Activists who knew all along, who struggled for years against the Marcos regime, felt vindicated, the same time they felt keenly the loss of one of their more outspoken members; people who wandered through the martial law years under varying degrees of slumber felt shaken, stirred--they never realized how it was, and they were angry. They wanted justice and it was not immediately forthcoming, perhaps never will be.

Caught up in the moment was Regal Films producer "Mother" Lily Monteverde. She had approached filmmaker Mike de Leon for a possible project, any project, as long as she could do the casting. De Leon suggested a Jose "Pete" Lacaba script he had been trying to develop since 1982--about a labor strike and a nun played by famed Filipina actress Vilma Santos. Lured by the prospect of de Leon--arguably the Philippines' most brilliant director--doing a film with Santos, Monteverde greenlighted the project (as to the possible controversy over the film's politics, one wonders if she perhaps didn't think things through, or simply didn't care).

Sister Stella L is arguably the first motion picture from a major Filipino studio to respond to the Aquino assassination. Not directly--the story focuses on Sister Stella Legaspi (Santos), her involvement in a cooking oil factory strike, and her gradual awakening into full political awareness; no mention of Marcos, or of martial law. But the very fact that the film spoke frankly of labor unrest, featured songs and chants with a decidedly socialist slant (it must be remembered that for the longest time Marcos presented himself as the best qualified leader to fight communism in the country), and towards the end suggested that police or military officers might be involved as strikebreakers--those were outright acts of courage. Everyone assumed Marcos' grip on the nation was tight as ever, his ability to silence critics--or worse, make them 'disappear'--as absolute; everyone assumed--and in those early days, they may have been right--that people's lives were in danger, thanks to this film.

But they were in an angry mood, and would not be silenced. You feel it radiating from Pete Lacaba's script--like fever heat--and you feel it in the chanting that on occasion is heard from the soundtrack. Make no mistake, this is a Pete Lacaba film more than it is even a Mike de Leon film; the narrative is linear, the script construction muscular, the dialogue lean and functional. The film resembles other Lacaba-penned films of the period (see Bayan Ko (My Country, 1985), and Orapronobis (Fight for Us, 1989)) more than it resembles other films de Leon has directed (I'd heard that de Leon himself admitted it was his least personal film). If (as I suspect) Lacaba's biggest flaw is an abiding fealty (once quaint, now with the passage of time somehow heroic) to neorealism and straightforward, Hemingwayesque storytelling, it's a flaw one wished would afflict more Filipino scriptwriters; if (as one Filipino filmmaker once told me) Lacaba's fault is that his characters talk far too intelligently, with too much self-awareness, it's a fault too few Filipino characters suffer from nowadays.

I'd mentioned Mike de Leon's direction. The man has one of the strongest if not the strongest and most distinctive visual style in all of Philippine cinema, and subsuming it to the scriptwriter is no small feat--if I find the film at all interesting, it's because of this unusual fact. De Leon's camera serves his story at all times, but the choice of material, the way the story unfolds, the overall tone you sense from one of his pictures--dark if not sardonic, at times both--is so unmistakable it's startling to see the warmer, more earnest emotional palette found in this film (Lacaba's scripts are rarely bathetic or unnecessarily sentimental, but there's a camaraderie found among his characters, particularly those committed to the cause--to his cause--that one finds irresistible). This combination of passionate (but rigorous) intelligence, and the intellectual chill surrounding it, holding it together, giving it form and structure, is a bracing mix--de Leon and Lacaba have not worked together since, so it's possible this may be the only example of such a brew in local films, at least for now.

Of the film's imagery, allow me to cite two--the scene where Sister Stella and Ka Dencio (the inimitable Tony Santos, Sr.) are captured and interrogated most clearly bear de Leon's imprint. Sadism and cruelty are a de Leon specialty, and what makes it so startling isn't so much the physical pain inflicted as the casual, almost cheerful bonhomie of the torturers--it's as if they're playing some adolescent game, and from accounts I've read the attitude of some of the actual people involved isn't too far off. Sister Stella at one point is seated surrounding her interrogators, and her helplessness is palpable--what is it with de Leon and the straight-backed chair that the mere sight of one in his films can inspire so much terror (see also de Leon's Batch '81 (1982) for at least two other memorable occasions)?

The second is the film's finale (please skip this paragraph if you haven't seen the film), which was altered--de Leon had originally added footage of a rally that marched on Epifanio de los Santos (EDSA) Avenue (this was before the People Power revolt that eventually toppled Marcos), footage that would have put Sister Stella's struggles in a nationwide context. The film instead ends with Sister Stella framed against a serene blue sky, speaking. It's a plain speech--easily Lacaba's most characteristic moment--using simple but heartfelt words. Santos to her credit (it's the performance of her career) gives the lines very little histrionics: just the facts, ma'am, no palabok. The film's contemplative end, oddly enough, ties it with a more contemporary socialist filmmaker--Lav Diaz, whose Hesus Rebolusyunaryo (Jesus the Revolutionary, 2002) concludes on a similar note. I'd asked Diaz why such a strange finish, and he said "it's necessary--after a period of action, Hesus has to step back and meditate on his actions. He has to pause and consider the meaning of it all." Sister Stella L. is a clean dive into political consciousness and a clear call to action, at the same time there's a thoughtfulness underneath the picture that lingers in the mind and haunts one's memory.
at 8:24 PM

Use to disdain this one. Nowadays I do see its value, and courage.