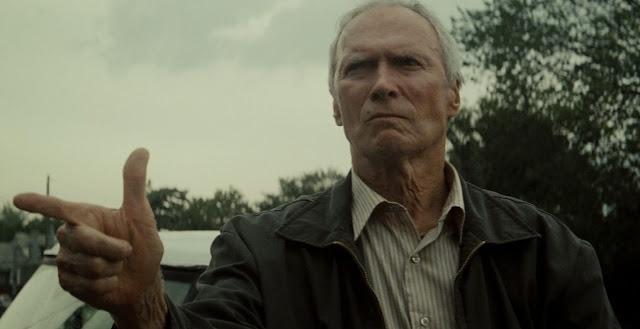 You can't help but feel that Clint Eastwood's Gran Torino is a leave-taking of some sort; not of the filmmaker--at 78, he's an apparently hale and hearty and very active filmmaker--but of a persona he's cultivated since it debuted thirty-seven years ago, in Don Seigel's superb (some might say appallingly so) noir thriller.

Yep--I'd call this "Dirty Old Man Harry," only Eastwood's grizzled iconoclast fails to molest anyone (in the 1971 film he sounds bitter about the misconception: "Now you know why they call me 'Dirty Harry.' Every dirty job that comes along."). Save for the military service and working-class background (he's a Ford assembly plant worker who served in Korea), Eastwood's latest screen incarnation might be Harry so many years later, long retired, living alone in his little neatly kept house and slinging racial slurs under his breath at the ethnically mixed neighbors passing by his sidewalk.

It's not one of Eastwood's major or even serious works, nor I suppose was it meant to be; it's basically a deconstructed 'Dirty Harry' flick where instead of bullets Harry fires zingers and instead of psychotic hippies or fascist police officers Harry guns after a Hmong gang that's leaning on the son of Harry's Hmong neighbors--seems they want the young man to join them, and are willing to beat him up for the privilege. Harry here wears a far more human face; at one point he's invited to a Hmong get-together, and one laughs as he grapples with a foreign language, unfathomable mores (he learns later that it's bad luck to rub a child's head), all kinds of strange dishes (the sickly smile he gives while Hmong women pile his plate full of indescribable food is, well, indescribable).

It's a two-worlds-collide comedy not a serious drama, but that doesn't mean Eastwood lacks any serious motive for resurrecting the man. At one point in the earlier film a man says of the anti-social detective: "he doesn't play any favorites; Harry hates everybody. Limeys, micks, hebes, fat dagos, niggers, honkies, chinks, you name it." The line of dialogue is said with a wink, but Eastwood's probably gotten grief over it anyway, or felt he didn't go far enough--he has to present the same ostensibly racist crustiness just one more time, to probe for dough underneath. Harry here is proficient in all the ethnic insults, and rolls them with relish in his tongue. He probably believes that he's harming no one, that no one buys his billy-goat gruff act anyway, but he hasn't thought matters through--people who know him well (his barber of many years for one) give as good as they get, but the newly met (and those raised in a culture based on courtesy and tact) are bruised by his rough manners. It doesn't help that he customarily keeps people at arm's length; refuses to get involved in their affairs; readily assumes the worse about them (though at one point he's pretty much right--the neighbors' son is, after all, tried to steal his beloved Gran Torino).

Easily the finest moments in the film are those where Harry--stumblingly, grudgingly--extends a wizened hand. If he commits a faux pas for rubbing the child's head, at least he took the moment to make the gesture; if he turns down family offerings of food and flowers it's more a desire to be left alone rather than actual distaste for the offerings (loved it when he spots a platter of egg rolls--without missing a beat, he instructs the Hmong couple to lay the plate down inside his house). Harry develops a spiky relationship with his neighbors ("There's a ton of food." "Yeah, well just keep your hands off my dog." "No worries, we only eat cats."). It's not so much that Harry's spikes wear down rubbing shoulders with the Hmong--like the bit of grit in an oyster, Harry helps the Hmong (particularly their son) eventually grow their very own thick hide, studded by their own set of spikes, to better deal with him.

The film may sound like Dirty Harry and the Hmongs in outline, but really the focus is on Harry--like any mature filmmaker, Eastwood's started looking back on his career, rethinking and recasting figures from the past. Akira Kurosawa gave us an Toshiro Mifune playing an ambitious Macbeth in Kumonosu jo (Throne of Blood, 1957), resurrected a similar figure decades later in Tatsuya Nakadai's King Lear figure in Ran (1985), then introduced a mellower, smaller-scaled version of his aging hero in Madadayo (1993); John Ford cast John Wayne as a dashing if somewhat naïve bandit in Stagecoach (1939), then much later turned him into a frighteningly bitter vigilante in The Searchers (1956). Harry thanks to Seigel's urban mythmaking became icon as well as iconoclast; Eastwood shows the loneliness, the need inside of him to reach out to people, to establish a meaningful relationship of some kind, to matter to someone once again.

Eastwood's storytelling here, unlike say in his previous effort Changeling, is refreshingly bright and straightforward--Eastwood's always been a practitioner of meat-and-potatoes storytelling (allowing for the occasional lengthy handheld shot), and I for one prefer it when he relaxes into this default style of his, rather than straining for one somewhat different from his own (and it isn't as if that style never made for compelling cinema--look at Eastwood's A Perfect World (1993), easily my favorite of his works, or the final ten minutes of this film, both occasions where the camera achieves a languorous, almost surreal lucidity).

I know, I know, the man's name in this film is actually Walt--but whom are we fooling? Eastwood feels strongly enough about a bit of unfinished business that he devotes a whole film on finishing said business (it's a possible commentary on the regard--or relative lack of-- Eastwood has for Harry that the film for the most part is a lighthearted race-relations comedy, with guilt, loneliness and anguish a buried (carefully or not may be a matter of opinion) subtext). This is Harry's swansong, his last chance at playing civilization's champion and white man's scapegoat, all rolled up in one grizzled and crinkly package, and he takes advantage of it to the fullest; I for one don't begrudge him this final burst of energy at all, at all.

Although I didn't get to the cinema much last year, I can state without reservation that this was my favourite film of 2008. Sure, Gran Torino seems blatantly low-key, especially in the context of Eastwood's filmography, but that's if you consider Gran Torino merely a drama. Considered as a comedy of manners, Gran Torino shifts gears (what a terrible pun!), and becomes one of the most ambitious tragic satires I've seen in quite some time...

Eastwood's performance takes some cues from the comedy of Don Rickles. Rickles' humour would be offensive if it wasn't for his delivery and charisma. Very few performers have the talent to walk this comedic tightrope, and Eastwood walks this tightrope like an Overman. It's a remarkable performance,and like Bill Munny, an Eastwood original in design and engineering.

For me, the ending is more Romantic than melodramatic. Walt's/Harry's demise strikes me as the death of a masculine sensibility in (at least) American filmmaking. And really, when Eastwood and Scorsese die, the authentic threads to American film history will be severed. And while Tarantino and the Andersons (Wes, P.T. and even Paul W.S.) will try to take up the mantle, they'll only be able to dress the part.

I think there's plenty of romance in melodrama.

But yeah, if Scorsese goes, someting valuable goes. He's the only combination I know of a great filmmaker. enthusiast, archivist, impresario. And he provided the voice to one of two shark's in A Shark's ale. ,