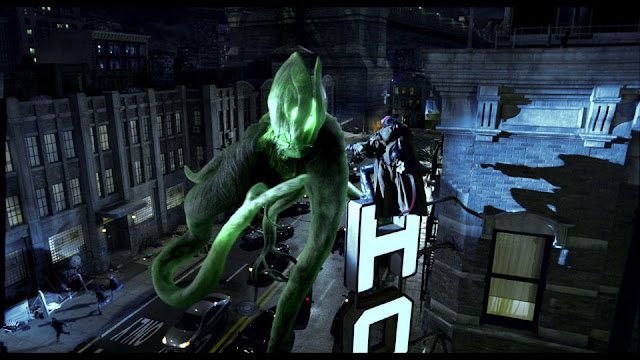 The big red one

Mike Mignola's Hellboy stories aren't your typical superhero fare. They're basically grim forays into the worlds of science fiction and mythology (or rather, mythology used as science fiction, where the supernatural follows a vague, constantly shifting set of working principles, and the government is savvy enough to establish an entire department (the Bureau for Paranormal Research and Defense, or BPRD) to handle the more unruly elements). The serious tone of the comic book ("graphic novel" is the fashionable term) is leavened by gallows humor delivered in an unflappable deadpan style; this, plus the constant sense that Hellboy--the hero of Mignola's stories--is doing his job, even if said job involves the dispatching of "tooth fairies," cute-looking tiny carnivores so named because they go after teeth first ("Bet you they don't leave money, either" quips Liz Sherman, Hellboy's pyrokinetic colleague and domestic partner). It's that disconnect between the often fantastic, often horrific activities of the BPRD and the more mundane attitude of the main characters that forms the series' appeal--that and the quality of Mignola's graphic line, which can suggest detail and depth of darkness (half the time Hellboy seems wrapped if not completely lost in shadow) using a minimum of penstrokes.

The films can't reproduce that line, and to del Toro's credit, they don't try. Instead del Toro takes the chance to flesh out Hellboy (Ron Perlman, preternaturally cast) and his colleagues: Liz (soft-spoken, sultry Selma Blair), Abe Sapien (physically and verbally eloquent Doug Jones), their boss Tom Manning (Jeffrey Tambor, every bit as droll as in the first picture, if less prominent). Add Johann Krause (John Alexander, voice by Seth McFarlane), and the film's a bubbling brew of power struggles, petty jealousies, and suppressed frustrations, punctuated by the occasional slapstick. Hellboy 2: The Golden Army after all is said and done is a comedy of the workplace--Office Space with supernatural hijinks and CGI effects thrown in.

That's not a putdown; if anything, it's the film's glory. The priorities of del Toro's characters are less the hell-spawned monstrosities confronting them than the everyday struggles they confront: issues like getting along with the boss (Manning frets at Hellboy's tendency to hog the limelight), dealing with a new employee (Krause is not just punctilious and Hellboy's superior, but also possessed of a thick Teutonic accent McFarlane stole from the terrorist villain in Die Hard With a Vengeance (and Hellboy hates Nazis)), hashing out domestic conflicts (between the empty cans of cat food and all the Butterfinger candy wrappers littering their bedroom, Liz has about had it living with "Big Red," as she sometimes calls him).

Cat food; pushy bosses; even pushier newcomers; trouble with the missus--unlike almost any superhero picture you can think of, there's a real dynamic between Hellboy, his friends, and the world at large. You can imagine them kicking off shoes after work and knocking back a few beers (and in fact in one scene they do); you can imagine them having worked together for years (too many, even), knowing each other's strengths and foibles to the point it's become a source of constant irritation, same time it's a source of unspoken strength (they quibble but when the chips are down, they have each others' backs). With this simple rearrangement of priorities Hellboy 2 upends the comic-book superhero movie genre, reveals to us where its real interests lie: not in computer-generated faceoffs but alcohol-fueled sing-alongs, to the tune of Barry Manilow's "I Can't Smile Without You."

Hellboy and Liz's relationship may have been crowded out along the way, but that's part of Liz's point--Hellboy's too outsized and chaotic for anyone to live comfortably with him, least of all her; wherever he's around he's center stage, causing havoc. But Liz isn't to be underestimated; in the resolution of their feelings for each other lies Hellboy's ultimate maturation, and Liz decides for both of them in one fell swoop, once and for all. Of course del Toro focuses not so much on what Liz does as on Hellboy's reaction to what she does, and as Perlman plays him, he reacts with a memorable sense of befuddlement--for once life is a step ahead of him, and he needs a moment to catch (or grow) up.

Not that other elements are neglected--far from it. Del Toro stages the action with admirable fluidity, using Hong Kong trained Brad Allen's fight choreography (one thinks of Yuen Woo Ping's work in the Wong Fei Hung (Once Upon a Time in China) pictures) to create graceful setpieces that wouldn't look out of place in a musical. If Hellboy and whoever he's confronting (usually Prince Nuada (Luke Goss) armed with a spear of varying length) comprise a pas de deux of violence, in del Toro's hands the action becomes something of a pas de trois, a far more intricate affair with the camera as third partner, weaving in and out of each other's dance. Set against a variety of backgrounds--a teeming underground Troll Market, a nighttime city street, a fantastic series of giant spinning gears worthy of a Busby Berkeley musical--the fight choreography doesn't lose but instead gains from the unorthodox treatment; with character front and center over action the viewer is kept surprised, off-balanced, not quite knowing what to expect, alert and delighting in what he sees (he is in effect left wanting more, not less).

Beyond the action are the villains--perhaps one consistent complaint against the first is the lack of a memorable antagonist; here del Toro corrects the oversight by giving us a royal family of elves, Oedipal in their dysfunction: King Balor (Roy Dotrice); Princess Nuala (Anna Walton); above all the aforementioned Prince Nuada. No mere evildoers they, from their standpoint we're the aggressors; they have been honoring their end of an ancient treaty, even if this means diminishment of their kingdom and influence (it's Nuada who's had enough, and wants to fight back). Later a plant elemental rears to life, looming over Brooklyn; Hellboy goes into action, but the outcome is more tragic than triumphant, more mournful poetry than spectacular effect (leastwise it's not the spectacle that strikes you first). "We die and the world will be poorer for it," Prince Nuada warns Hellboy; Del Toro drives home the point that even those who fight against us have their grievances, that every victory implies its own set of losses, that every creature no matter how destructive deserves at the very least a passing tribute.

Beyond all that Hellboy 2 is an occasion for del Toro to unleash a gift for creature design and poetic imagery exceeded only by--well Hayao Miyazaki comes to mind. The film's opening, where puppetlike figures play out the back story, evokes everything from Orson Welles' animated prologue in Le Proces (The Trial, 1962) to Jan Svankmajer's often unsettling stop-motion animation, giving us a foretaste; the rest of the picture is a full buffet, from the plant elemental and its snowfall of spores (perceptive of del Toro to observe that a creature's penultimate act is often a reproductive one--an attempt to disseminate what may be irretrievably lost) to the unstoppable gold soldiers, their combusting internal engines giving them the inner glow of fireflies swarming in a cavern, to the Angel of Death (again, Doug Jones) looming over Liz and a dying Hellboy to spread its many-eyed wings.

That last image--the Angel with his pair of many-gazed wings pronouncing Hellboy's fate--completes the symmetry of del Toro's scheme. Where del Toro grants Nuada a point of view and a chance to express it, with Hellboy del Toro suggests that death might, after all, be best ("it is his destiny to bring about the destruction of the Earth," the Angel hisses at Liz. "Not now, not tomorrow but soon enough"). Poor crabby Hellboy with his candy-apple skin, sawed-off horns, deep growl and hidden heart of gold may represent the end of the world as we know it--who would pay such a price for his continued company ( I won't, I guess, but would have to really think about it first)?

An aggrieved villain, a doomed hero, a wonderland of images--no, not your ordinary comic-book superhero adaptation at all. One of the best pictures to come out of Hollywood this summer, possibly all year.

I'm not really drawn to big movies of this sort, but with Guillermo del Toro at its helm, I'm all up for it. He's a visionary!

This is probably the only big movie I've really liked this year, myself.

Noel, just saw this yesterday. Fuggin' awesome, man! Knocked my socks off. In some ways, the best script and movie of Del Toro. My only quibble is that the climactic fight with the golden robots seemed kinda rushed and had a somewhat generic "video game" quality to it. Though the wushu/kung fu fight with the Prince was top-notch and spectacular. Boy, the troll market scene was another classic, you can add that to a theoretical "best of creature movie scenes" list, one also containing the famous bar scene in the first Star Wars. And what a VO performance of the Dr. Krause character in the diving suit!! Amazing!

Rico, two quibbles with your otherwise fine comment: video games are fine but maybe a more useful analogy are swarming ants, reinforced by the soldiers' beetlelike look--I for one tended to itch when I saw them crawling inwards at Red and company, like a choice piece of steak dropped from a picnic table.

And there's an unearthly beauty to the soldiers' bright-red inner glow, I submit, a visual gorgeousness that lifts the sequence beyond any video game. It's supposed to give the impression of overwhelming power, of course, which isn't the whole climax's point--that's just preparation for Red's showdown with Nuada, and (most pointed of all) what happens to resolve that (in effect the film's emotional climax). After which one can only sing, softly, to poor Abe "'tis better to have loved and lost than..."

As for the troll market, I submit the sheer invention and (again) visual beauty surpasses Star Wars' equivalent scene which, I suspect, was lifted from an early scene in Kurosawa's Yojimbo (all it needed was a dog to give it fully away), and this may only be me, but Star Wars was always an overrated pic (maybe the single piece of film related to Lucas that ever delivered the real goods wasn't even directed by him, but by Kershner).

True, maybe it's just my bias against the general overuse of CG, etc in Hollywood films. But Del Toro is probably the most artful in his use of it among the bunch. Yup, EMPIRE took the characters and the performances to a whole new level. But there's no denying the influence the first STAR WARS had over a whole generation of filmmakers. The new ones I couldn't care less for. I think Lucas' best film might be his college short of THX1138, shot while he was at USC. I remember being astounded at the tech brilliance of it, the fact that a college student had made it. And it was pretty arty! When you see his work at that stage then the idea of APOCALYPSE being originally designed for him to direct suddenly doesn't sound so far-fetched or totally left-of-field. But that version of George is long dead and buried. Hope Del Toro doesn't go that way....then again, next stop-New Zealand?

Early promise--admit I haven't seen Lucas' short. But beyond the kind of wan hopelessness of the feature THX, the bright pop nostalgia of Graffitti (which is partly do to Haskell Wexler mixed with '60s rock, partly due to an acting coach hired to help out with the cast, what else has Lucas done? Star Wars itself was a hodgepodge of influences, from Yojimbo to WW 2 films to Hidden Fortress to (for the final shots) Triumph of the Will.