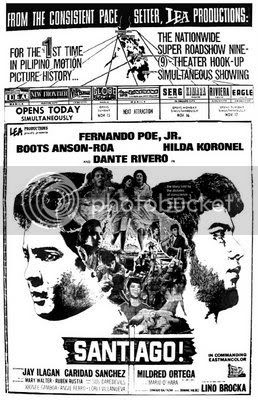 A beautiful sequence, and not the least among its achievements is the fact that if the scene works no one should notice anything--yet everyone watching is undeniably, if unknowingly, moved.
The film's latter half devolves--harsh word, I suppose, but after a scene like that--into a series of standard-issue (if well produced) action sequences, including some low-key if impressive stuntwork, and a lengthy tracking shot of villagers crossing a flooded underground tunnel to safety. FPJ mows down his share of Japanese villains--you know the drill: a vigorous sweep of the semiautomatic and everyone with slanted eyes drops to the ground. Interestingly, when Celso Ad. Castillo directed FPJ in Asedillo (1971) the star refrained from any superhuman acts of killing; he was just a schoolteacher turned rebel hero, and if anything seemed outsized and near-mythical about him it was probably due to Ad. Castillo's expressive direction (the film's theme, after all, was the making of an ordinary man into a legend) and Sergio Lobo's larger-than-life cinematography. Interesting too, that when Gerardo de Leon and Eddie Romero directed FPJ in Intramuros: The Walls of Hell (1964) the film had realistically staged (if inventive, even tense) action sequences. FPJ there was like a Latin James Dean, all tilted head and youthful arrogance and the camera (and audience) can't help but love him, but no, no wholesale slaughter of the Japanese at the pull of a trigger.
To be fair, De Leon, Romero and even Ad. Castillo when they worked with FPJ were already veterans; Brocka on the other hand was a neophyte director making his sophomore effort. He was lucky to land an assignment with FPJ, and if the star of the production wanted to kill scores of soldiers in a single sweep, who was Brocka to say otherwise?
Still, Santiago! has its place in Brocka's oeuvre: an early draft for Tinimbang Ka Ngunit Kulang; a rare moment in the man's career when he stepped outside of his melodramatic domain; an honest attempt at epic period filmmaking a la Tatlong Taong Walang Diyos (Three Years Without God, Mario O'Hara, 1976). And one can see how Brocka, even with the burden of a large-scale production full of extravagant special effects (unlike Tatlong Taong or Intramuros, this film boasts of large, intricately detailed models of churches and bridges being blown up with genuine explosives, not New Year's Eve firecrackers--always an expensive undertaking), even with star producers dictating terms, even with the limitations of the war drama genre, still manages to make the film somehow personal, somehow his own.
* On those flashbacks--I'd say they were mostly unnecessary save one, a black-and-white, wordless interlude where Mario O'Hara and Caridad Sanchez play a married couple whose happiness is torn asunder by the Japanese. What is it with Brocka's intensely told side-stories (especially when O'Hara is acting in them (see also: Tinimbang)), that they often steal attention from the rest of the film, and are often more interesting than the main narrative line?
at 1:06 AM

As requested, deleted your link.

It's cute. Are you really attached to that announcement at the beginning? Far as I can tell it doesn't really relate to anything and only raises false expectations. Or did I miss something? Personally I think the film works better without it...