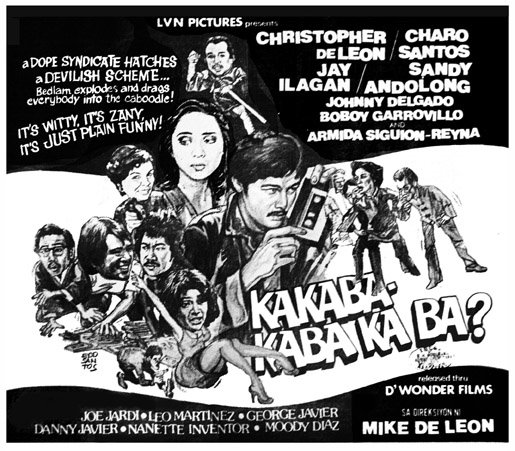 On the occasion of its restoration and screening, an old blog post slightly tweaked.


Come on get happy

Filipinos love to dance; even convicted Filipinos love to dance, and dance well--you only have to see the occasional video clip CNN plays, of orange-clad convicts from the Cebu Detention and Rehabilitation Center dancing to pop tunes (the choreographer is an accused mass murderer) but strangely enough there aren't a lot of noted Filipino films that feature dance, or at least notable filmmakers making musicals that include dance.

There are early musicals, like Carlos Vander Tolosa's Giliw Ko (1939); problem is the surviving print is in wretched condition (even after restoration by The Philippine Information Agency and the National Film and Sound Archive in Canberra), and what little song and dance I do see in it is, well, of interest, but not quite inspiring. Comedy team Tito, Vic and Joey have done dance numbers; so has comedian Dolphy, among many others. Lino Brocka did Stardoom (1971), a showbiz melodrama full of singing (only the melodrama--a Jacobean struggle between two brothers (Mario O'Hara and Dante Rivero) is more interesting than the music); O'Hara's own Kastilyong Buhangin (Sand Castle, 1980) features singing (you can sense that O'Hara actually gets into his song numbers--gives them genuine emotional heft), and fight sequence so gracefully done I'd argue they are dance numbers (and for a while was tempted to write about them as such).

But an honest to goodness dance number, in an honest to goodness musical, one that I actually like? None off the top of my head, except, of all people, from the forbidding dark genius of Philippine cinema, Mike de Leon. The filmmaker responsible for such grim masterpieces as Itim (Rites of May, 1975), Batch '81 (1982) and Kisapmata (Blink of an Eye, 1981) directed Kakabakaba Ka Ba? (1981), a bizarre caper comedy involving Yakuza gangsters smuggling an audiocassette tape full of opium into the city of Manila and eventually to the northern city of Baguio, for processing and eventual distribution throughout the Philippines.


The title itself--often translated as Does Your Heart Beat Faster?--is literally untranslateable, a play on the present progressive form (at least I think it is) of the Filipino word kaba, meaning 'worried' (literally: 'worrying'), with the final ka ba? being a pronoun and a verb (the term as a whole literally translates as 'Are you worrying?'). For a Filipino, just reading the title brings a smile to the lips; by the time he's explained it to a non-Filipino of course all the fun's been drained.


One of the writers, Racquel Villavicencio (Init sa Magdamag (Midnight Passion, 1983)) recalls de Leon providing her and Clodualdo del Mundo (Maynila sa Mga Kuko ng Liwanag (Manila in the Claws of Neon, 1975)) with the basic story, which they built up into a complete screenplay under de Leon's guidance. She notes that the original concept was much darker, with more satire of the Catholic Church, more emphasis on the drug subplot. Of the three de Leon films she collaborated on with del Mundo and de Leon (this, Batch '81, Kisapmata), Kakabakaba is her favorite, partly because she added so much of the humor (she also recalls providing the woman's point of view in the writing of Kisapmata). 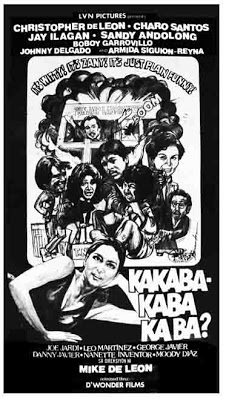 The end result is--well, it's not the funniest Filipino film ever made (some Dolphy films come to mind), but I think it's the subtlest, wittiest, arguably most demented. The tape is smuggled through an unexpectedly (and unbelievably, for anyone who's actually had to deal with them) effective and uncorrupt Philippine Customs by a hapless innocent bystander (Christopher de Leon) and his friends (Jay Ilagan, Charo Santos, Sandy Andolong); along the way, they tangle with the Chinese mafia (led by the imperious Armida Siguion-Reyna), a mysterious priest with a painfully loud crick in his neck (Leo Martinez), a legion of sweetened soybean vendors, an intimidatingly porcine woman wrestler, and more.

But what makes the film--for me, anyway--is the scene where a flock of nuns waddle, penguinlike, into a common room. They hum a worshipful hymn; they crowd around one nun (the rotund Nanette Inventor) who looks up heavenward,while an organ plays sonorously. Suddenly a crash of chords; the camera plunges down the ring of nuns who shake their hands at the lenses; Inventor lifts her habit revealing a fishnet-stockinged voluptuously curved leg; the nuns promptly launch into a no-holds barred rendition of Bigyan Mo Kami ng Tinapay (Give Us Our Daily Bread).

The choreography is standard Broadway fare with a few moves borrowed from some Vegas chorus line but so superbly timed (and de Leon's films are all about superb timing) that even when you know it's coming it still sends tingles up one's spine. It's one of the strongest expressions of de Leon's cynicism (which surfaces more often than one might think--in brief moments in Batch '81; in Aliwan Paradise, his short sequel to and satire of Maynila sa Mga Kuko ng Liwanag;* in Bayaning Third World (Third World Hero, 1999)). It goes hand-in-glove with de Leon's suspicions that the Catholic Church is the biggest show around, full of glitz and lights and music and not much else (the song's repeated request for immediate sustenance is implicitly answered by the arrival of the smuggled opium (as in: for the masses)). It fits in with the overarching theme of de Leon's films, that the quotidian surface of Filipino life conceals a teeming, often decadent, often perverse underworld, ready to be revealed at the rise of a skirt. The number may lack production values, but more than makes up for them with a keyboard-banging melody, and the exuberance with which the ecclesiastical performers belt it out. In my mind I see the priests and nuns in the theater audience gasping in shock and outrage, their eyes glittering in the enfolding darkness.

*(Maynila sa Mga Kuko ng Liwanag being the film that cemented his reputation as a visual artist (he was cinematographer) he was effectively biting the hand that fed him (then again (and de Leon is all about jokes within jokes), he's biting his own hand, since he was producer as well)) 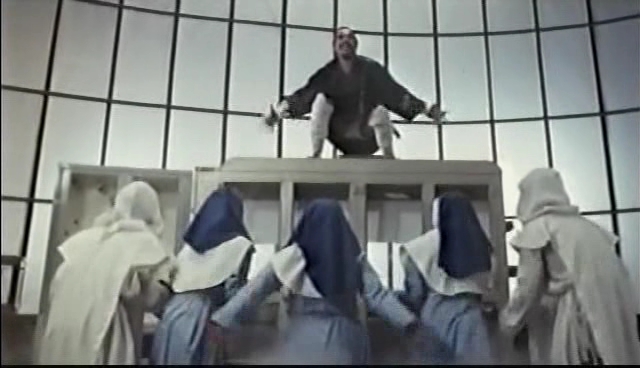 The film continues on to a rousing finale involving the Chinese Mafia (with Ms. Siguion-Reyna), the Japanese Yakuza (not so much presided over as dominated and upstaged by a lunatic Johnny Delgado) the dancing nuns, de Leon (Christopher, not Mike) and his intrepid friends, eyepopping sets (by Ms. Villavicencio) reminiscent of James Bond movies and the Academy Awards, a samurai sword duel (Delgado vs. de Leon (Christopher not Mike)), the arrival of the ever-slow but always sure Philippine Constabulary, and, of course, a happy ending with two simultaneous weddings, backed by a full symphony orchestra. 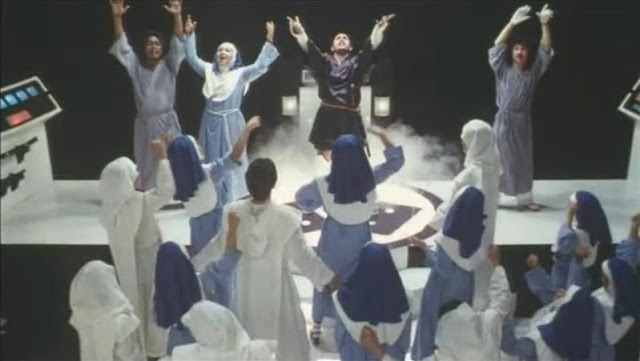 (Kakabakaba Ka Ba? is now part of Cinema One Classics, and should be screening first quarter of 2016. Am not sure if the screenings or any cable or video releases will have subtitles--which is more than enough reason to strike an acquaintance with a Filipino (an offer of dinner--and real dinner, please, involving meat and plentiful carbohydrates, not some Occidental notion of cocktail finger fare), and ask him to perform benshi duties. That, or learn Tagalog. Anyway, Mike's such a visual director, his films are worth buying without subtitles...)

(Correction: the restored version does have subtitles!) 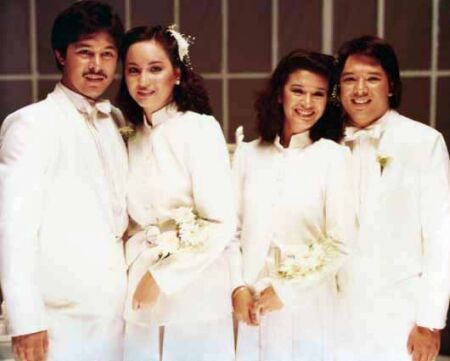 This post was also part of Ferdy on Films' Invitation to the Dance Blogathon, May 4 to 10th, 2008

I can't in good conscience recommend that one, girish. It's not a bad film--he hasn't done a bad film--but it isn't representative of what he is. It's an intelligently made, tautly directed political drama, rather didactic to be him (and if he's anything, it's never didactic).

This is more the work of the writer, Pete Lacaba, whose authorial voice is so strong it comes across no matter which director he works with--Lino Brocka, Tikoy Aguiluz, Mike. Fact is, he's the only writer I know that has ever drowned out Mike's 'voice.' Not an easy feat.

I am in heaven as somebody has converted his videos to digital format and uploaded them in the Pinoy Movies forum. Okey, the quality is not as good as from negatives to digital, but if it's the only possibility i have to see films like Ang Alamat ni Julian Makabayan; Salome; Oro,Plata,Mata; Kisapmata- I'll take it. Kasal and Misteryo sa Tuwa was also uploaded. I balked at Boatman and then it was gone.

What happened to Mike de Leon? He became a recluse. He's suppose to direct the movie Filipinas (2003) but backed out after Lolita Rodriguez was replaced by tita Midz. Comeback, Mike.

I'd like to think he sometimes visits this blog, and that your words reach him and prod him to reconsider...

@jade worldwide where is this pinoy movies forum?

I'm an audience/cinephile resides in Hong Kong and I was found your film articles about Philippines Films in books & blog long time ago.

Just know Mr. De Leon is making his film "Citizen Jake", maybe this is the reason he cannot attend to film festival for sharing his experience for filmmaking. I strongly recommend my friends to watch De Leon's film (especially "Kakabakaba Ka Ba?") because it is rarely to see Philippines classics in Hong Kong. My friend is working in L'Immagine Ritrovata, so I know they restoring so many Asian region films, including Philippines films. L'Immagine Ritrovata restored Mario O' Hara's "Tatlong taong walang Diyos", but HKIFF did not choose the film but Udine Far East Film Festival does.

I have no idea if you watch my comment but sharing my feelings on Philippine films. (Last Saturday we just saw Lav Diaz's "The Woman Who Left").

I'm sorry the blog's settings haven't been notifying me of comments for a year now. I'm just catching up. Thanks for the kind words, to me and to our cinema.