There Will Be Blood (Paul Thomas Anderson, 2007) 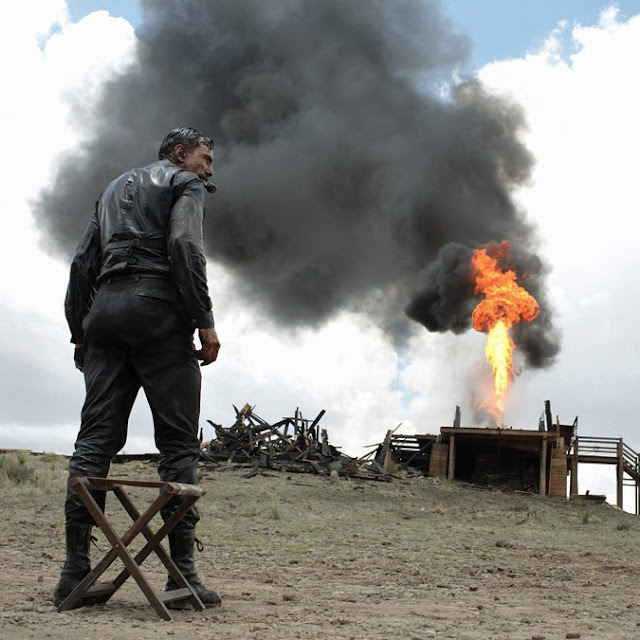 There Will Be Blood (2008), Paul Thomas Anderson's loose--very loose--adaptation of Upton Sinclair's 1927 novel Oil! is a huge mess, is being (like its heavily award-nominated fellow production, the Coen brothers' No Country for Old Men) hugely overrated, but is nevertheless an entertaining romp. I can't deny it has impact, however scattershot, misshapen, or misguided.

Interesting to note general features in the film, and how they sprout out of obsessions Anderson has nursed time and time again in his previous films. We have the sprawling, overambitious narrative (pretty much a given in his works); we have the strained to the point of rupture relationship between young man and father figure (Sidney, Boogie Nights, Magnolia); we have the evangelical character as a figure of evil, hypocrisy, pathos (again, Magnolia--you might call this an expansion of that previous film's biblical, early-half-of-the-previous-century's tendencies). We've got endless yelling and shrieking, occasionally terrific shots and terrifically edited sequences, and yes, blood--glimpsed at throughout the picture, lingered on (if not directly looked at) in the final scene.

The opening ten minutes are the film's finest, a wordless prologue with Daniel Day-Lewis' oil-drilling Daniel Plainview (Plain view, changed from Sinclair's J. Arnold Ross--Anderson is not one for subtlety), struggling all by his lonesome self to set an explosive charge, suffer a mishap, then drag himself into the nearest town for treatment. Anderson has admitted to being inspired by John Huston's The Treasure of Sierra Madre (1948), and this could be a sequence lifted wholesale from that classic (with oil substituting for gold), but the Huston influence doesn't stop there: when Plainview finally opens his mouth, it's Huston as Noah Cross in Roman Polanski's Chinatown (1974) that speaks. In probably the nuttiest decision Anderson has made on this or any other of his pictures, he (or Day-Lewis) decided to base the actor's entire performance on Huston's voice, mannerisms, walk in that picture.

I don't know how that's supposed to work. It's distracting, but it's also fun as all hell, watching Day-Lewis try get away with it, pretend he's giving us something original, taking it to town and several suburbs beyond in size, intensity, well-salted meatiness. Hate it or love it, it's a memorable performance--as if Anderson wanted to give us Cross' life story, oil substituting for water (one thing missing is the incestuous relationship with his charge--for some reason Anderson doesn't want to go there with H.W. (Dillon Freasier), the boy Plainview adopts after the father dies from one of many drilling accidents (one wonders why the issue of on-site safety is never once raised)).

The music's fantastic. Always thought Anderson relied too much on his collection of rock and pop records for borrowed atmosphere and secondhand poignancy; with the help of Jonny Greenwood he applies a score that sounds miles away from his previous efforts, both dissonant and barbaric--like an idiot savant with a pair of steel pipes, banging away his idea of a symphony inside an oil rig.

Visually Anderson's dialed down his in-your-face faux-Scorsese pyrotechnics--instead of the camera rushing up to a main character (always wondered how the actor could just stand there without flinching), we get long shots of the surrounding terrain, as if Anderson had noticed for the ver first time that yes, America has beautiful vistas, and yes, they are worth looking at once in a while. I won't say he has a feel yet for landscapes--he's no John Ford--but he does give us a sense of Plainview's isolation early on and later, of the vast spaces within which the oilmen have had the effrontery to raise their matchstick apparatus, penetrate the earth's skin, suck out its black blood (blood and oil--and later milk--are equated in many ways). Later Anderson pulls off several sumptuously paced coup-de-theatre setpieces--a leavetaking in a train that tugs (okay, yanks) at one's heartstrings; a powerful eruption turned oil fire that burns day and (most spectacularly) night, the flames casting a diabolical glow on the workers' faces; a scene at a privately owned bowling alley that not only gives us sense of exhausted opulence (the camera's slow movements keeping us constantly conscious of the expensive-looking bowling lanes, of the remains from a previous night's meal scattered on the polished hardwood), but also of a game (an unstoppable ball. a helpless tenpin) being violently played out between two men.

Structure is the film's and Anderson's characteristically biggest weakness. Anderson has almost always been interested in dramatic climaxes--an interesting premise to introduce his characters, then a quick lunge at some kind of climax without bothering to bring in such boring niceties as character development (think Julianne Moore freaking out at the drugstore counter in Magnolia (1999)). Thanks to Sinclair's novel Anderson has enough incidents to help shore up his usual shaky structure (it just wobbles a bit here, there). Perhaps his least persuasive ellipse comes between 1922 and 1927, when Plainview's child H.W. has become a young man (Russell Harvard). The final scene between father and son is the worse in the picture, I think, because we've barely been introduced to the grown man (what happened to his firestarting tendencies? His antisocial slapping? We get some suggestion that his girlfriend-turned-wife reformed him, but that's like slapping a Redeemed by the Power of Love sticker on his forehead and assuming all is forgiven) before he's wrangling out his relationship with Daniel on a permanent basis. Plus that sign language interpreter that sits in on their meeting (H.W. lost his hearing in yet another of Daniel's 'accidental' oil explosions) is a golden chance lost--the interpreter is previously shot and presented as harboring some fondness for the boy, but during this crucial sequence Anderson can barely spare any interest in him. Aside from wasting all that furtive characterization spent on the man, his perspective of Daniel, H.W. and their relationship together might have added dimensions to the scene (Is Daniel such a monster? Is H.W. such an innocent? Is he--the translater--some kind of mediator, a father substitute, perhaps?), dimensions Anderson denies us by denying the translator any voice on the matter.

I think Day-Lewis also knew that this scene was poorly written and conceived; he looks restless here, as if he wanted to put the young drip aside and get on with the real meat of the movie. Every scene Day-Lewis has with Paul Dano as Eli, Daniel's evangelical adversary, is terrific, they have real chemistry together, and for all of Day-Lewis' considerable skill Dano manages to steal the limelight every time. Their final confrontation is the film's proper climax, with a strong sense that the power play going on between them has gone on for a long time (they previously appeared onscreen together in a baptism scene that managed to be both horrific and hilarious, an unholy union of Dreyer's La Passion de Jeanne d'Arc (The Passion of Joan of Arc, 1928) with Dano in the Falconetti role, and something by Abbot and Costello).

What does any of this have to do with American history, with relations between big business and religion? Precious little, I'd say; my experience with big business is that it's all too ready to embrace the many hypocrisies of organized religion, that both institutions are too eager to collaborate, share too many interests, too many common enemies. If anything, organized religion is a business, and many businesses with their philosophies and corporate cultures present themselves as a kind of religion--in which case, this relationship, the most adversarial in the film and source of its crude energy, is hardly an accurate portrait of America, or any version of it in the past. I can't consider Blood a serious work of art (though of the pictures nominated for that damned golden doorstop, it's easily my favorite), but it does have an outsized feel, a ponderousness that's new to Anderson (and therefore refreshing, fairly), and you do see him pull a few new tricks (the Greenwood score, for one) out his sleeve. Add Day-Lewis' amusing (if nonsensical) film-length Huston impersonation and, why, I think we can call this Anderson's best work to date.

I agree, it's problematic. And you're right on the money to say the 1920s sequence is weak. If anything, the histronics in the final scene are just too over-the-top, even in Day Lewis' cartoon villain performance, to ring true, and thus the climactic scene, for me, was plain silly.

But scenes, images and emotions are still with me, and there's no denying the power of its parts.

Me, I'm more of a believer in Magnolia, with its strength in numbers. As eccentric as his performance is, Day Lewis just can't carry an almost three-hour film. As his foil, the preacher kid is not bad, but it's a one-note performance, and when he descends into the kicking and screaming he's too often off-key.

That last part may be problematic, but it's hilarious slapstick. It goes off the edge of the cliff and once it hits bottom keeps plumbing depths. It's not proper drama, but it's something. Not profound, but fun, kind of.

Day Lewis' performance--well, it's basically an impersonation, and if I like it at all it's because Day-Lewis gave me the back story to Noah Cross. What the performance lacks is a great film to inhabit, and be the center of mystery of.

Magnolia had many virtues; maybe my biggest problem with that is that it's setup, climax, setup, climax. At least Blood had some development, however perfunctory. And Cruise is good, maybe the best he'll ever be, but he's no Day Lewis (even a mimicking Day Lewis).

I wish I had more of Paul Dano. I keep feeling there's a great performance there somewhere, at least thirty minutes of it snipped out, and that if they put that back in place he'd give us major chills. As is, he's a fun foil, a kind of oh Diane Chambers to Day Lewis' Sam Malone. The whole film feels like it missed profundity by maybe an hour.

Thanks for a refreshing critique - one of the more intelligent, less hyped pieces found on the net. Not surprisingly, every American review I read was glowing - "Just like Citizen Cane" etc etc

I think the fundamental problem lies in the need to cram Day Lewis into every scene. We never get a moment to reflect on who he is.

This is Stroheim's "Greed" for people who don't do black and white.

And the observation on Anderson's perpetual need to climax is insightful.

Yes, the end turned into a porridge of sorts. Even Brahms and the memory of Citizen Cane couldn't redeem the film at that point.

Thanks; actually I think Citizen Kane isn't all that--Welles has done far greater work since. His next film The Magnificent Ambersons, for example, is the first of his seriously flawed yet far more profound pieces.

This is what I think: Paul Thomas Anderson