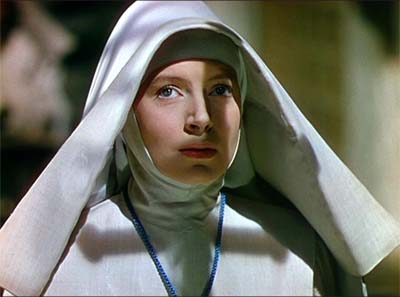 She was a great beauty and a great actress both. Yes, I remember her doing a polka with Yul Brynner, and rolling in the surf-soaked Hawaiian sand with Burt Lancaster, but before her Hollywood extravaganzas, she was the muse of one Michael Powell, who immortalized her in two of his very best works: Black Narcissus (1947), and the great The Life and Death of Colonel Blimp (1943).

Ms. Campaspe in a quite moving tribute puts it all in proper perspective: "Michael Powell's camera found love and longing in that beautiful face, as he did in life."

I wrote this about Blimp some two years back:

I'd say Blimp is Michael Powell's masterpiece--his one epic film without an obvious epic feel (it sneaks up on you), and his most ambivalent portrait of a man ever. Deborah Kerr makes you ache for her, and Anton Walbrook as Theo is devastating. He has this scene where he's telling the immigration offcier why he, an enemy alien, wants to move to England, and he has to explain not only the intervening years, but his 180 degree turn of character (from fanatic military officer to wary and humbled pacifist). He does so clearly, convincingly, Powell's camera slowly moving in on his face; there's years of struggle and heartbreak in that speech, in that face.

Roger Livesey as General Candy is wonderful; he embodies all the contradictions of the character so perfectly you can't make up your mind about him or the film (which is what I think Powell intended)--you love him the same time you want to smack him upside in the head for being so thickheaded. Kerr isn't just beautiful, she subtly shades the three different characters so that you can differentiate them in your head afterwards (all this at the age of twenty one!). Even the little bits are great--James Mckechnie as the enterprising Spuds, John Laurie as faithful Murdoch (even Murdoch's eventual fate, delivered like a casual aside, is memorable). But Walbrook was something else.

There are moments in the film where Powell really seems to be trying to undercut everything that Candy stands for, or at least, show us the darker side of his obliviousness, or innocence--that may be what Winston Churchill (smart man, I've always thought) was responding to when he declared he disliked the film (ironic, considering that Churchill and Candy are in so many ways alike). That's why it's such a great film, it doesn't go for the easy answers: Candy is a genuinely good man, and the film shows not just his virtues but his limitations. I believe Theo is aware of those limitations--in fact, I believe Theo more closely represents Powell's point of view. He knows the world isn't what Candy thinks it is, but he can't help loving him, nevertheless.

I might add that Kerr moves through that film as if she were Powell's--as represented through Candy (and, to some extent, Theo)--muse, a kind of spirit or sprite, ever desireable, never quite attainable; even when she becomes Candy's wife she doesn't quite belong to the story--or she belongs to it, but is never quite possessed by anyone in it (Theo had her for a wife and lost her, which may have caused in part his change in heart; Candy had her (or another who looked like her) for a wife for years, but when he loses her, he keeps looking--the years of domestic bliss are apparently far from enough). She's this recurring motif that draws Candy onward, onward, ever searching. The same might be said of Powell (see Ms. Campaspe's post); the same might be said of anyone enamored by Kerr's magic.
at 5:06 PM

I think her best role was playing the Governess Miss Giddens in Jack Clayton's THE INNOCENT'S. There was that perfect contrast between sexual mania and respectability that the whole film hinged on.

I should've mentioned that; that was a wonderful film.

Michael Powell is still underrated. He never got the attention that Lean or even Carol Reed got. I'm not a fan of his cult film "Peeping Tom" but the script writer of that film, Leo Marks, wrote a superb WWII memoir about British codebreakers called "Between Silk and Cyanide."

My own favorite of Powell's films is probably his adaptation of the Bela Bartok opera "Bluebeard's Castle" - which should always be listened to by candlelight (in the Boulez version).

That sounds interesting; would love to check it out.

I can't think of three better actors, more perfectly inhabiting their parts, than Livesey, Kerr, and Walbrook. One of many reasons why "Blimp" is as close to an all-time favorite film as I'll ever have.

Amen to that, brother.