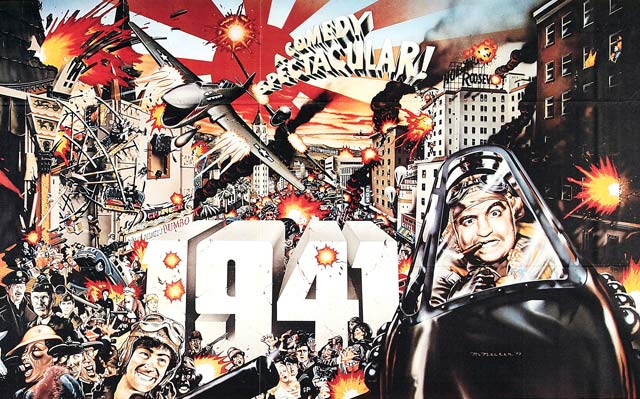 Damian Corvallis at Windmills of My Mind has been doing a gargantuan run of blog posts about Steven Spielberg's entire body of work (to date, anyway), and the post on 1941 in particular caught my eye.

I agree with many of his points--it's misshapen, it goes on too long, too loud, and much of it is simply not funny. But I don't enjoy 1941 (which I saw on the big screen--makes a big difference, I think) for the humor; I enjoy it for being one of the purest, least sentimental, most extended and elaborate expression of Spielberg's graphic talent ever put on celluloid. So he wants to make a musical? I think he's done his musical, only the score is a John Cage-like cacophony of gasps, shrieks, screams, bellows, crashing cars, wooshing airplanes, crunching tanks (John Williams' march acts like an impatient usherette, hurrying the impromptu orchestra along). It's a symphony of chaos, building and building and daring you to dare it to build even more--and calling you on your bluff, every time.

Belushi, however I think is crucial--he doesn't need to be funny, he just needs to be loud, louder than life. He has to be to make a bigger impression than all the crashing planes and falling Santa statues and wildly careening ferris wheels. He's the film's spirit incarnate, an emblem in the shape of a human cartoon; a figurehead, if you like, fixed to the hood of a runaway ten-wheeler.

Bob Gale and Bob Zemeckis worked on the script, and it has their brand of can-you-top-this? comedy. Damien wonders if maybe Zemeckis had directed the comedy would have been more consistent with the storytelling; as is Spielberg had reportedly softened the cynicism (the movie's still refreshingly free of easy sentiment and emotional uplift though (except when Gale and Zemeckis mean to skewer it (i.e. Dumbo))). But Zemeckis has never had the grasp of camera movement and use of film frame Spielberg so effortlessly displays (though he does have I think an equivalent skill in editing and pacing), and for once I'm able to enjoy a collaboration between the two--Zemeckis' heartlessly intricate plotting, Spielberg's visual inventiveness--on a huge scale.

It releases something in Spielberg I think, the amoral uncaring child in him (Is the movie racist? But everyone's lampooned, from whites to blacks to Latinos to Germans to the Japanese to macho males to helpless females (ably skewered by Wendy Jo Sperber, who's about as helpless as an armored car), in a freewheeling spirit that feels quintessentially Angeleno). Some have called this Spielberg's It's a Mad, Mad, Mad, Mad World, and the comparison to Stanley Kramer's big thud of a movie in many ways is just (overlong, overproduced, loud, unsubtle) with the crucial difference: this director knows how to stage and shoot action sequences, even invest them with an emotion, an overriding sensibility, a vision. Spielberg reveals that vision in the key shot of nighttime Los Angeles seen from on high, a tabletop model with streetlights glittering like a fistful of jewels scattered across said table, flak bursting like so much buttered popcorn. First time he used the shot, I gasped (on the big screen, it's breathtaking), and realized: he's enjoying himself; he's like a kid with the world's best and biggest toy, having the time of his life.

This is the Spielberg I love. Screw heart, screw emotion, screw attempts to even sketch a realistic human emotion (don't get me started on tackling complex moral issues in the real world); Spielberg here just has creatures and objects and vehicles bouncing off each other for two or so hours, brilliantly. It doesn't have Spielberg's usually expert pacing, carefully calibrated not to overtax the audience's attention span too much, and I love that too--it's as if for once he's beyond such calculations, as if he's too wrapped up in his need, his lust to show us something never attempted before (and never equaled since, far as I'm concerned) to care about boxoffice potential. It's as if he's starting to learn what it's like to be an artist, pushing the boundaries of what's possible--in this case, in farce.

This is the side of Spielberg that might have had more success bringing J.G. Ballard to the big screen (forget narrative logic or character development, focus on interactions, conjunctions, abstractions of shapes and sounds and colors). This is why 1941 represents for me Spielberg--despite himself, despite his noblest intentions, despite all his later regret and embarrassment at doing the picture (I'm happy to note, though, that Zemeckis on the DVD commentary of the film sounds largely unrepentant)--at the top of his game, delivering his very best.
at 12:38 AM

This is the Spielberg I love. Screw heart, screw emotion, screw attempts to even sketch a realistic human emotion (don't get me started on tackling complex moral issues in the real world)...

Yes, yes, yes. Finally someone says so. Unfortunately, he will never own up to it.

As a child of the sixties, I think I understand what happened to him. It's the Paul McCartney syndrome: when your talent takes you to a rarified level of fame, at some point the fame outweighs the talent, and buries it. And all the feedback that is needed by even the most talented creators, to be able to tell when an idea is working or not, is lost in sycophancy. Think Michael Jackson, Axl Rose. (Who, along with Speilberg, live in L.A. Hmmm.)

By contrast, take Bach: he consistently produced work of astonishing quality while living outside any of the major cultural centers of his time, and because of the different technologies of his time was not very widely known. It was not until about seventy years after his death that his reputation began to blossom. By then, his ego was beyond stroking.

It's a classic line with some critics, usually with 1941 fans, I suppose. Doesn't make it any less true for me.

Something like Believing in One's Press, you think? Or to borrow from Manny Farber, termite art swelling up into white elephant art.

The film cost 35 million to make. It took 93 million. It was not a flop by any stretch of teh imagination and it's nice that Spielberg decided to do something differernt, other than working with the same on formula. I love it!

It doesn't have the rep of a huge boxoffice hit. But boxoffice is irrelevant to me (well, ultimately; I know it does help a director's career)--just think it's great.

Funny, though, I don't see him doing anything 'different' here--if anything, it's the very culmunation of the Spielberg formula--toylike, Rube Goldberg sequences, amorality, a sense of vsual play. But here he pushes it as far as it can go.