Dr. Who, Season 2: The Girl in the Fireplace 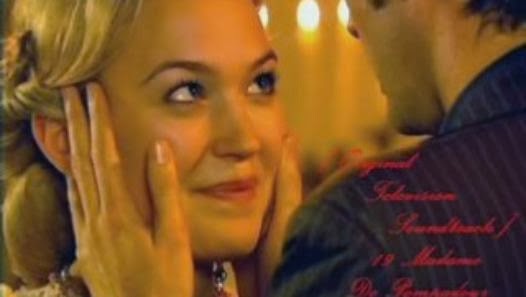 .
Dr. Who: Season 2 discs (belatedly available on Netflix), and the standout episode has to be this one, a tale of growing affection between an 18th century French mistress and a whatever century Time Lord, three thousand years and two and a half galaxies apart, linked together by (that cliche symbol of passion!) a burning fireplace.

It's also television writer Steven Moffat's contribution to the David Tennant season, after his oh-so-memorable pair of scripts for Christopher Eccleston (The Empty Child, and The Doctor Dances, 2005, both of which won that year's Hugo Award for Dramatic Presentation, Short Form), and it's one step in a carefully prepared story arc that ends with a once-in-for-all determination of the fate of Rose Tyler, the Doctor's companion for two (2005-2006) seasons.

That fate's been a long time coming. In Season 1's The Parting of Ways Rose learns just how much the Doctor means to her, how traumatic separation--particularly when one believes it's permanent--can be, and how that peculiar ability of the Doctor to regenerate (to in effect replace the actor playing the old Doctor (Eccleston, who left the show) with a new one (Tennant)) can turn all notions of the man upside-down.

In School Reunion Rose meets Sarah Jane Smith (the more-beautiful-than-ever Elisabeth Sladen) and discovers the grim fate of many of the Doctors' companions--that they often get left behind, or worse, abandoned. The Doctor's excuse is a valid one...more or less ("You can spend the rest of your life with me, but I can't spend the rest of mine with you. I have to live on, alone. That's the curse of the Timelords.") but Sarah Jane has a point: the Doctor could at least have said goodbye. Rose, in effect, has been given notice.

The Girl in the Fireplace presents a somewhat different case to Rose: what if the Doctor meets not a former companion--a long-ago, much-beloved memory--but a woman he cares for now, more than her, possibly? Moffat sketches an interesting portrait of the kind of girl that might catch the Doctor's attention: intelligent (of course); beautiful (naturally--with all of time and space to explore he needn't settle for anything less); famous (funny, for all his democratic instincts--picking up a shopgirl for a companion, for example--the Doctor still can't resist the allure of celebrities ("Cleopatra!" "He mentioned her only once!" "He called her Cleo!")). But more than beauty and status, it's possibly the nature of the girl's personality--straightforward, intuitive, perceptive--that the Doctor finds so enchanting.

More, Reinnette Poisson (a.k.a. Madame de Pompadour, mistress of Louis XV) is so damned aggressive (it helps, I suppose, that the Doctor's been watching over her since she was seven), and as we learn in this episode that's possibly the crucial quality needed to capture the Doctor's heart. Tennant's Doctor has an elusive charm similar to Cary Grant's: more than good looks it's the reserve that draws women to him. He's always the gentleman, ready with a quick compliment, but never aggressive, never threatening; women find him funny, find themselves intrigued by him, but before they realize they actually have to rise up and do anything about it he's gone, lost to the vast reaches of time and space in his police box ("Does he still stroke bits of the TARDIS?" Sarah Jane asks Rose; "Yeah, yeah, he does!" Rose responds, laughing. "I’m like, 'do you two want to be alone?'").

Rose and Sarah Jane are one of a handful of women able to come out and ask point-blank to come along; Reinette, however, is possibly the only one to reach out and actually grab the Doctor, hold him down long enough for a good, long hard kiss (you can sense all the males all over Britain, all the viewers of the Sci Fi channel, and all belated viewers of the DVD--from sixty to six years old--catch their collective breaths at that kiss). More rewarding than the stolen buss, however, is the mind-meld the Doctor has with Reinette (he's trying to find out why a collection of malevolent clockwork robots are literally after her head). He learns much about her, opening a doorway into her mind, but as Reinette points out, a door opens both ways--one can step out as easily as another can step in. No one's ever thought about it, I suppose, not for the nine hundred plus years the Doctor has been wandering; Reinette does and, interestingly, without much thought or effort (add 'impulsive' to her list of character flaws (or virtues, if you will)). The Doctor, bewildered and not a little delighted, asks "how did you do that?" Silly git--anyone could probably have done it all the time (he admits he doesn't mind-meld often, and most subjects are probably too intimidated by the experience); it just needed someone with the effrontery to go ahead and try.

I'd go on to say The Girl in the Fireplace is essentially a love story, and a heartbreaker (no spoiler here, surely--there are no 18th century courtesans accompanying the Doctor in succeeding episodes (though Tennant (at least I remember it was him) in the video commentary suggests that Reinette, if pulled aboard the TARDIS, would have ended up pairing with one of the next episodes' Cybermen (Rise of the Cybermen)). If the story is at all moving, that's because Reinette and the Doctor spend so little time together, just quick clinches and stolen kisses as the Doctor emerges from behind swinging glass and revolving fireplaces (shades of Ingmar Bergman's Smiles of a Summer Night) to present himself to Ms. Poisson, yet manage to learn a great deal about each other ("Your name," she whispers; "it's more than just a secret--" leaving us wondering "what the hell--?"). Love on the fly, on the run, past spinning stone fireplaces, with a horde of sinister clockwork figures after you threatening to cut it all short--that's the kind of life one can expect, loving a Time Lord; or, as Reinette so memorably puts it "The Doctor is worth the monsters."

Earlier I mentioned that tired old cliche, the burning fireplace as a symbol of love and passion. By episode's end the fire is put out, the cliche drained of all attendant cheesiness, the image of a girl looking through the flames given a new and powerful meaning. Love and passion--and loss and tenderness--indeed.

And dancing as sex, of course. Moffat always uses dancing as a metaphor.

Watch out for Season 3's "Blink" also by Moffat. Might dang well be the best episode of the new series.

I personally love his pro-banana stance. Any mention of the fruit in that coming episode?

Well, in the old Dr. Who's, I still feel really frightened about those zombies and that lava that turns people into zombies. It's that white haired Dr. Who. I also remember the opening sequence's haunting Theremin music. Do they still use that in the current iteration?

I gotta admit, Noel, I never took you for a Who fan, but that's a great analysis of one of my favorite episodes of the new show. The new show has done a very good job at slyly insinuating sex into the stories without turning it into the standard situation where there's NOTHING between a man and a woman except for sexual tension.

But I've always been a science fiction freak; Dr. Who comes with the territory (and much as I dislike Harlan Ellison, I do agree with him on one point: Who is so much better than Star Trek, Star Wars, and the like).

Actually, I've only seen snatches of Who through the years. I got into watching him recently. Have made my way through what William Hartnett is available and am plowing through the Patrick Troughton years.

Quentin (a.k.a. My Evil Twin Brother, the theme song is there, pumped up on steroids. I miss the original (actually there're quite a few originals), but the scripts seem emotionally richer, from what I've seen so far. Daleks are Daleks, though, even the first time I see 'em--a real delight.

And the white-haird doc has to be Jon Pertwee. Will make my way to him, one of these days...