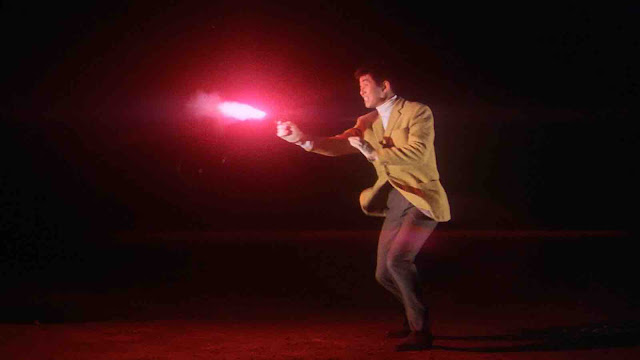 You'll shoot your eye out

Seijun Suzuki's Tokyo Drifter's like a bottle of Hennessy smashed across your face; even through the waves of pain and blood--and even more pain from the liquor seeping into the cuts--you appreciate the taste of fine cognac.

Suzuki doesn't even pretend to be trying for coherence--he goes for the most bizarre effects amongst the most baroque settings (he says that unlike Ozu--whose realism and the feeling of the commonplace is key--he needs to wow his actors with his sets, cue them to what he expects from them in terms of performance). He doesn't try for realism, either--in the eye-popping train-track shootout, it's clear that the hero Tetsu (Tetsuya Watari, a pretty boy whose sense of entitlement on the big screen is for once utterly justified) is walking in front of a rear projection. It's not the rear projection you're supposed to look at--or rather you're supposed to look at it, snort in derision, then be blown away by the utter cool of the hero's walk. 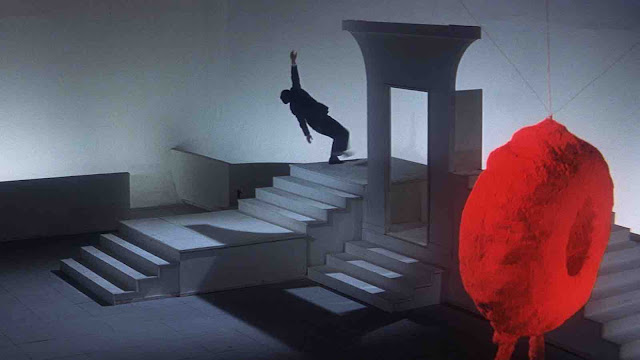 But it's not just attitude and art direction--there's a core of real feeling in this picture. When Tetsu has to say goodbye to his boss and wants to cook for him but the man turns him down, the moment is unaccountably moving--you can see that they love each other as father and son. When Tetsu is helped by a man who betrayed his superior, Tetsu can't help being grateful and annoyed at the same time--he knows the man is good but can't stand what he considers ingrates, purely on principle; loyalty is a prime value for him, perhaps the only value. For all the bizarre elements in the picture the psychology of the film is actually quite coherent, and impressively complex.

The finale--Jesus, what wasn't influenced by it? Casino Royale (The Ken Hughes, John Huston, Joseph McGrath, Robert Parrish, Val Guest, Richard Talmadge-directed romp, not the Martin Campbell snoozefest) if it didn't actually steal the look and humor, followed on its well-trampled path; I'd say the Austin Powers movies as well, only Suzuki's has the stronger colors sharper wit. Think Tim Burton with more attitude, David Lynch on speed, Patrick McGoohan incarcerated on an island operated by Magritte and Bunuel in fiendish collaboration. This is terrific stuff. 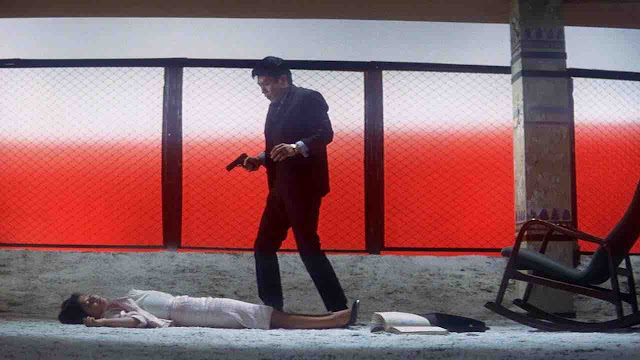 S. Suzuki's been growing on me lately and this one's sitting on my DVR queue and I've been saving it for the right day (even though it's possible I've seen it before).

Would you say this is more or less coherent than "Branded to Kill"? That one's was pretty shocking (I think even today it might rate an NC-17 in the states) and surrealist film and famously got Suzuki fired. It put me in mind of David Lynch and "Point Blank" only more fun, of an unhealthy sort naturally.

Oh--it's hard to say. Branded has wonderful sex scenes, I can tell you right off; the death scenes are much more elaborate. I'd say Tokyo has the more outlandish sets, and his use of color--what do they say when an American boy asks for a BB gun? "It'll put your eyes out!"

Ken Russell..Uhrm...less coherent, then, I'd say. Still, looking forward to it!

It's a terrifically entertaining film. And that theme song...