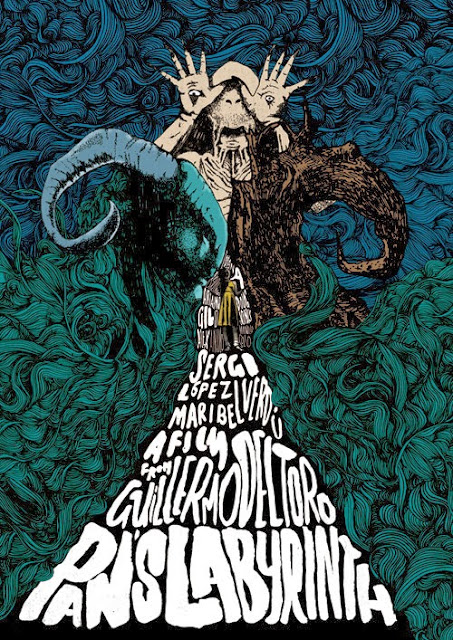 Oh, it's lovely. I've been saying up and down the block that CGI effects have no texture, no heft, no solidity, and worse of all no poetry, and here comes del Toro to make me eat my words.

Maybe his single most admirable achievement is to integrate the effects into his half-lit world, so that, say, a stone tablet seems every bit as real as an alarmingly long insect (which the girl mistakes for a fairy)--or is it the other way around? It helps that del Toro doesn't just rely on visual texture, but bits of behavior to sell the effect--like the insect peeking over the edge of the tree, clearly spying on the girl and her companions. He uses CGI simply, cleanly, to extend or make a touch more convincing floor effects (details involving The Pale Man (Doug Jones)--the blinking eyes, for example); most delightful of all (at least for me), he manages to ressurect an old device, used most memorably by Kurosawa, the wipe (which del Toro uses in ways you imagine Kurosawa would be all too happy to imitate).

I'd like to note that somewhere along the margins, del Toro scribbles in homages to various films--a reference to Dorothy's ruby slippers, for one, and a giant maze and ending that evokes Kubrick's The Shining.

Do the fantasy segments have anything to do with the reality? Why, yes, I think--the toad in the great fig tree is a metaphor for Fascism in Spain, the fat amphibian feeding off the roots of the tree, causing it to wilt (the key the toad eventually vomits up being brother to the key that The Captain (Sergi Lopez) uses to keep his stores locked up). The girl's adventure in the chamber of the Pale Man (Jones wonderfully eloquent in his wordlessness) is a metaphor for what's going on literally under The Captain's nose--like the Pale Man, The Captain is blind to what's going on until both girls (Maribel Verdu as a member of the Resistance, Ivana Baquero as the young girl) break 'the rules' (the complex and seemingly arbitrary series of actions necessary in practicing the art of espionage), causing The Pale Man/Captain to turn his attention towards them, forcing them to improvise.

I've heard accusations that The Captain an unbelievably sadistic cartoon, that it would have been better, more emotionally complex to have him actually love the girl and his mother. I submit that that would be ideal, but the time actually spent on developing such a relationship would take too much emphasis away from the fantasy element; more, I think Lopez and del Toro do a terrific job as is of humanizing the 'monster.'

Lopez (who's been good in everything from Western (1997) to Une liaison pornographique (A Pornographic Affair, 1999), but never like this) plays The Captain with charisma and insouciant wit; despite his many villainies, he's a charmer, a villain with a Hitchcockian sense of style and courtesy. Del Toro, like Hitchcock, knows what these people are like (the things they do here, which are horrible enough, are hardly anything new, nor even the worse that people are capable of in real life); maybe the single cruellest act The Captain commits isn't the various tortures or executions, but the way he taunts one prisoner suffering from a bad stutter.

And beyond the charm, beyond the sadism, you understand the man. He's proud, vain; it's his weakness (as Mercedes informs him, and he's smart enough to recognize) and his defining character. Pride led him to choose a beautiful woman for a wife; pride made him refuse to acknowledge that mere women could wreak such havoc on his plans and ambitions; pride led him to put all his eggs in one baby carriage, so to speak, the unknown child that will carry his name (flip side of that pride is a profound sense of mortality, symbolized by the watch--a relic you imagine he carries around partly to remind him of how little time he has left, partly as accomodation to the romantic notion that at the proper time he'll break it, marking the exact moment of his death for his son to remember). Lopez's character is given a measure of empathy, even sympathy, though never for one moment are we asked to consider him anything less than evil.

Chris Jarmick singled out Ariadna Gil (still gorgeous since I last saw her in Amo tu cama rica (1992)) for her performance, for the way she transforms from trophy wife to prisoner in gilded cage in the space of a few lines of dialogue (using nothing more than a slight desperate edge to her delivery of said dialogue); more, the change isn't so much a change as it is a revelation, the dropping away of a veil, to reveal the character's inmost truth.

As for the little girl Baquero--she does an excellent job, helped by a film that gilds and illuminates her character's subconscious. You notice that the very nature and details of each succeeding adventure is influenced by circumstances (or do they foreshadow--shape, even--said circumstances?) in the present world. The influence can be most clearly seen, I think, in the final test, when Ofelia must confront The Captain himself, and challenge him for ownership of his most precious possession. Compared to him, the Pale Man is but a shadow of a threat.

Maybe her finest moment after all she's been through comes near the end, when she must convey the complexities of her final decision. She knows the faun is a hard taskmaster (in that sense he's much like the Captain), she knows what will happen if she defies him, but she just can't let go of her brother; you see it in her eyes, an almost instinctive freezing of her face and arms: it's a line she won't cross. The decision she must make, in effect, wasn't a choice between comfortable Fascism (which continued to rule Spain long after the end of World War 2) and a demanding rebellion, but between losing herself in the fantasy world she desperately wants to belong to and facing the reality she desperately wants to escape--both the monster closing in behind her, and the brother she holds in her hands.

I believe that the magic of the CGI creatures in the film owes a lot to the talent of Carlos Gimenez-maybe the greatest of living Spanish comic artists- and his work in the art department.

And Sergi Lopez is incredibly good in almost anything he does... he's one of my favourite performers and indeed worth following. So some people think he's too sadistic as the captain? Those who say that should remember Guernika: that was pretty sadistic, and what went on after their victory was sadistic too.

That's very interesting to know, thanks! I'll try googling his name, get a feel for his other work...

By Guernika, I take it you mean the town bombed by the Nationalists (forgive me if I get my facts wrong), and which inspired Picasso's famous painting? If I remember right, when authorities asked him "did you do this," Picasso replied "no, you did."

Gimenez also had a similar hand in The Devil's Backbone, even inspring one of the characters (Jaime).

In my view, I've always thought Ofelia's fantasies were some form of "death wish" which was eventually fulfilled at the end.

You can find some basic information about Carlos Gimenez and his work, here`s a link to his official website (The site is in Spanish, but has a good number of amples of his work: www.carlosgimenez.com)

Re Guernika, yes it's the town bombed by Nazi German bombers (Hitler supported Franco and sent troops planes and supplies to help him win the war). The anecdote of Picasso took place in occupied France, where he was living, when the Nazis asked him if he was the author of the painting.

I have not seen all of Sergi Lopez's work, but I liked the psichiatrist abandoned by his wife he played in El Cielo abierto (aka Ten Days Without Love, 2001), and the Portuguese salesman who strides in trouble's way in Lisboa (aka Lisbon, 1999).

Thanks for the correction, Gloria. I had already found Gimenez's work. I like it very much but darn if I can see the influence in the film. People have mentioned Goya (I think that's spot on); I keep thinking in particular of El sueno de la Razon produce monstruos--the fantasy sequences do resemble nightmares, and so I think does Franco's reign...

I'm wondering about that death wish theory, Patrick--why would she want death? Because her father is gone, a false one taken his place and she misses him so much? Because her mother has gone ahead and joined him? Could be, could be...

Noel, while most of the samples of work in Gimenez`s website are drawn in his comic style (Most suited to comedic everyday situations which he enjoys portraying), he's got another "serious" style which he has used in sci-fi, horror and Fantasy stories (Like adaptations of Lem, London or Poe).

His conceptual work for Pan's Labyrinth is a good sample of that other style(some samples athttp://www.canmag.com/news/4/3/3169)

The Goya reference is spot-on. I believe that Goya's paintings and engravings speak much better about Spanish history and idiosyncracy than a thousand books.

People cite Goya's Saturn eating his children as the inspiration for the Pale Man.

I like the sketches. Wish the Nerve Ghost had been realized on film.

MY NAME IS CARLOS GONZALEZ, PRESENTLY WORKING WITH THE VINE ENTERTAINMENT IN SANTA MONICA..
I AM A WRITER..WRITTEN A WORK ENTITLED, "TORY THE LITTLE DUST DEVIL" I WOULD LIKE TO SEND YOU A COPY FOR YOUR CONSIDERATION..JUST EMAIL ME YOUR ADDRESS AND I'LL SEND IT..AT:fyerx@yahoo.com