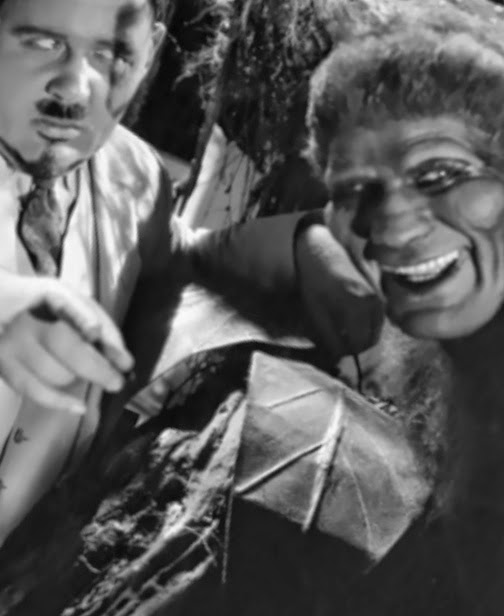 Did Charles Laughton direct Island of Lost Souls? The film shares so many images and feelings with Laughton's Night of the Hunter you wonder: if he didn't actually have a hand in it, Laughton must have learned a lot from the director, Erle C. Kenton.

H.G. Wells is on record as disliking this version; I'm not sure he's altogether correct to be so unhappy. The Frankenstein theme is still there, clear as ever. A suggestion of bestiality was inserted, between the Panther woman and the hero (renamed Edward Parker), but the eroticism of their scenes together add to the horror, not detract from it, and bring the theme of "the animal in us" home in a way Wells never dreamed of (Does he object because it's too successful? But Wells is supposed to be a liberal on such matters...). The animals are less varied and less distinctive, but Kenton is smart enough to relegate them to the shadows, where they're most effective. The period of spiralling doom and the sense of despair it inspires has been drastically shortened, but Moreau has been given a far more horrific (and ironic) end. Overall, I think the film does not embarrass its source material.

Laughton is magnificent here. It's not so much the fanaticism of Moreau that's so shocking as his playful languor--at times he seems like a big fat cat, toying with his prey, and poses accordingly. His interest in the Panther woman's growing interest in Parker has a voyeuristic edge to it; he seems to have been thinking up of all kinds of perverse scenarios for his creations, as much for his own pleasure as for the scientific interest (Did he have similar plans for Parker's beautiful blonde fiance? I wouldn't be surprised).

Kenton's direction is superb, doubts notwithstanding. He shoots without music most of the time, and the silence is often unnerving (music, even classic horror-film music, would have dissipated the tension). A veteran silent filmmaker, Kenton uses faces, lighting, shadows with great expressiveness (one might even say 'great Expressionism'). Bars are an important motif, Kenton's way of suggesting the restraints animals and humans alike continually apply to their unconscious feelings, to be released at both our peril.

The method of vivisection ignores what we've learned of genetic compatibility and tissue rejection, issues addressed by the later remakes (the dull Burt Lancaster version, the loony Frankenheimer/Brando/Kilmer version). But there's an old-fashioned horror to the idea of cutting up the parts of different animals and stitching them together that the more genetically enlightened versions lack. Not the most faithful version of Wells' classic, perhaps, but I do think it's the most powerful.

Elsa Lanchester, the main source for biographical details on Laughton, sadly usually left little recorded about the work of her husband in the occasions where she was away (i.e. we know very little about Laughton's work in Island of Lost Souls -she was then in London- or in Les Miserables -she was doing Bride of Frankestein-)

Of Island of Lost Souls she reports little else beyond the uncomfortable trip to Catalina Island in a ship full of animals, and Laughton basing his make-up on his dentist and the film was banned in England (up to the sixties!). From other sources, I know that he and Richard Arlen got along very well, in spite of the onscreen enmity of Moreau and Parker.

It is a pity that Lanchester doesn't give a more extended account, for, even though she believes that her husband was very unconfortable working in the film (animal smells, make-up hairsfrom beast-men invading everything). The fact is that he -uncomfortable or not- gives a remarkable performance, he absolutely trascends the cliche of the Mad Scientist and makes of Moreau a chilling and unique creation (the kind of thing Ian Holm didn't dare to do when playing Alan Moore's Doctor Gull in From Hell).

Reports on his playing of Brecht's Galileo years later say that he exposed perfectly the pleasure Galileo got from his intellectual work as a scientist... likely, Moreau clearly enjoys what he's doing, and his attitude when watching Parker and Lota is as much scientfic curiosity as plain voyeuristic behaviour.

I don't think he helped Kenton behind the camera, but it was not unlikely that he took good note of the proceedings of picture-making (He must have got some ideas from working with Whale, too)

Thanks gloria; wonderfully informative comments you make. Actually passed on a link to your blog at a_film_by and David Ehrenstein thanked me.

Yes, I think Laughton borrowing ideas from this film is the likelier scenario.

Agree excellent atmospheric film and I think this was very much a Whale inspired piece that Laughton wisely borrowed some things from for his masterpiece.

Ach, Bela. If I wrote a more exhaustive post, I should have. I blame laziness.