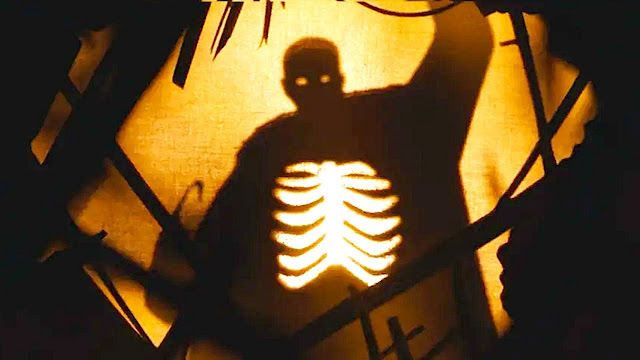 Call me by your name

The script of Nia DaCosta's Candyman is problematic, to put it mildly. It seeks to repurpose a pop gothic figure under a more politically correct ideology; it seeks to deliver a more hopeful overall message that acknowledges current racial tensions, while still administering intense doses of gore not to mention satire to a (presumably) bloodthirsty audience.

Does it work? Tell you what I think:

Faulting this sequel of Candyman for trying to rehabilitate a horror flick is silly considering the original production itself was a chimeric creature, an attempt to explore (Cash in on?) then-current still-current social issues. Writer-director Bernard Rose transposed Clive Barker's short story about urban poverty from London to Chicago, introducing the issue of race; actor Tony Todd came up with the character's background, about interracial love and horrific retribution (his arm sawed off, his naked body smeared with honey to be stung to death). Powerful story even if it has an arbitrary slapped-together quality, a composite of actual news events (Ruthie Mae McCoy, who died when a burglar climbed through a bathroom medicine cabinet into her apartment) and tales of racist lynchings, and you wonder at the Candyman's motives--if he's the victim of racism why prey on white and black folk alike? If he lives on the beliefs of others how does going back on one's word help his cause?

And yet the film works, partly because Rose is a tremendous fabulist partly because Tony Todd as Daniel Robitaille (aka Candyman) and Virginia Madsen as Helen Lyle are compelling together onscreen. If the film feels uncomfortable--if Todd's hooked monster raises the specter of stereotypes and his scenes with Madsen have a galvanizing charge--that only proves film's ability to burrow under one's skin.

You can see the genetic code in the new film--again, the eponymous figure acts out in response to racist injustice, again the mantle is passed on, from urban legend to rising artist. This time however Candyman isn't a single figure but a hive--a collection of melancholy drones young and old, seeking satisfaction.

Maybe what's lacking in this sequel-remake (not just an extension of but an expansion on the original) is the whiff of the forbidden implied between Helen the grad student and Candyman, echoed in Helen the plantation owner's daughter and Robitaille. Producer-writer Jordan Peele (collaborating with Win Rosenfeld and director DaCosta) doesn't attempt to establish anything sexual between new Candyman Sherman Fields (Michael Hargrove) and his acolyte/victim Anthony McCoy (Yahya Abdul-Mateen ll), though we are offered glimpses of a happily married gay couple (Nathan Stewart-Jarrett, Kyle Kaminsky) as a presumably more wholesome (and admittedly charming) alternative.

I do miss the sexuality. It's a constant in Clive Barker's work (whose Books of Blood short story "The Forbidden" was basis for the 1992 film) and what stitched the somewhat disparate limbs of Bernard Rose's plot together. DaCosta's film does have sex--mostly affectionate as between Anthony and his art-gallery director/girlfriend Brianna Cartwright (Teyonah Parris); a touch lurid, as between prospective lovers testing the Candyman legend in front of one of Anthony's art installation mirrors--but it isn't central to the film's concept, and doesn't have the same profane feel.

Quick aside in an attempt to explain--Candyman 1992 ostensibly has a victim (Helen) and victimizer (Candyman/Daniel Robitaille) but the subtext depends on who you're talking to--if white it's "Ooo black man, white woman!" If black woman: "there he goes trying to rise above himself." If black man: "Yes!" Not that this is what they should be thinking--more a shadowy creature lurking in the far corner of their respective minds that they likely refuse to acknowledge, much less consciously act upon--tho they often do.

And behind or beneath all that is Barker's inadmissible subtext, mentioned once in the film: "They will say that I have shed innocent blood. What's blood for, if not for shedding?" It's Candyman's rationale for killing black and white folk, innocent and guilty alike, but it's also possibly Barker's belief about the way the world works--on social media he's implied he's a victim of sexual abuse; he's also dabbled in sadomasochistic sex--a consequence of abuse? Never made clear, but it's a consistent dark thread running through his works (at one point Candyman suggests to Helen "The pain, I can assure you, will be exquisite"). No Barker is not polite company to keep.

Candyman 2021 sidesteps this troublesome baggage (tho I'd love to have seen them go the homoerotic route though) and (as in the original) rides over rough narrative patches through sheer style. I remember Rose's visuals back in 1992 and looking back recently was surprised at how primitive some of the effects were--the bees coming out of Tony Todd's mouth look as if they're coming out of a mannequin (though yes that is Todd's mouth and yes they're real bees) and the climactic conflagration is clumsily staged--but the imagery still retains power. An early sequence of Helen climbing into the gap left by a medicine cabinet and out a hole in the wall that turns out to be a larger-than-life spraypainted mouth suggests having entered one end of the Candyman's gut to come out the other. Later when Helen is confined to an asylum Candyman floats above her leatherstrapped body and Rose pulls off the visual coup of Helen's head pointed to the far end of the cell when trapped in reality, pointed to the cell door when under a trance state (video footage confirms that yes her head was pointed to the far end all the time)--Helen you might say literally flips her lid when alternating between fantasy and reality.

Todd strides through the film with vampiric majesty and Madsen is luscious as his victim/accomplice; Vanessa Williams is forced to shriek a little once too often, but her early scenes as a mother determined to raise her child properly in the housing projects and her later scenes as a figure of moral authority give the film its emotional spine.

DaCosta turns to Black Lives Matter for subtext and her film has a ripped-from-headlines urgency; her camera glides with more confidence and I believe she matches Rose in terms of inventiveness--where he opens with the camera soaring high above Chicago DaCosta glides far below, looking up at mistshrouded towers like so many gravestones. Folks are supposed to stare into a mirror to say his name five times--DaCosta has fun with the trope by having Anthony walk into an elevator that's all mirrors, front right left ceiling; you feel claustrophobic and agoraphobic at the same time, not knowing if the threat will appear from far off or at your side. Later Anthony confronts Candyman and in a nightmare parody of the Marx Brothers mirrors the gestures of his hook with a beestung bandaged hand. If you miss Todd's charisma you have the more impersonal presence of the police; you have DaCosta's smoothly seductive camera wandering through shadowed deeply colored sets (pause to gaze at Brianna's father Gil (Cedric Mays) perched sadly on a windowsill); you have Manuel Cinema's delicately trimmed shadow puppets, bouncing or biking across an illuminated screen (DaCosta employs them for flashbacks or folklore but really they're so beautiful they're their own excuse for existing). Robert Aiki Aubrey Lowe takes off from Philip Glass' hypnotic incantatory score and adds ambient sounds, recited dialogue, and his own voice recorded in layers, with sometimes just the hint of insect buzz.

Does DaCosta's film work? It's opportunistic and I can't blame it for being so; it presents gentrification's darker side, the sense that these ambitious black youths don't enjoy inalienable rights so much as a temporary license to contribute, a license that can be withdrawn at any arbitrary moment. Yes there are Candymen--at one point the original makes a brief appearance--but they're posed more like a collection of aggrieved victims than victimizers, with Anthony as the more or less central figure cut off (emasculated?) from his roots. If anything it's DaCosta's camera floating about and around these men that acts as the real predator,  stalking them, cherishing them, sadomasochistically drinking deep of their endless, exquisite suffering. 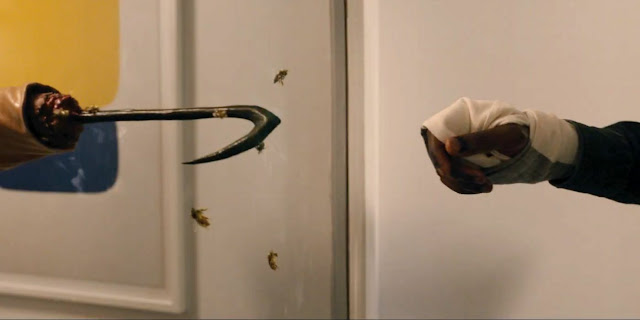